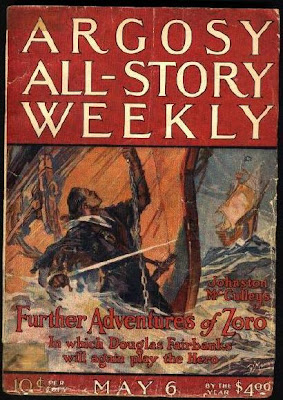 I remember being a big fan of the Walt Disney TV version of ZORRO when I was a kid, and I love the Republic serials ZORRO'S FIGHTING LEGION (with its insanely addictive theme song) and ZORRO'S BLACK WHIP (with the breathtakingly beautiful Linda Stirling). But oddly enough I've never read many of Johnston McCulley's original stories featuring the character. A few short stories here and there, but none of the novels . . . until now.
THE FURTHER ADVENTURES OF ZORRO was serialized in the pulp ARGOSY – ALL STORY WEEKLY in May and June of 1922 (with the title character's name misspelled on the cover of the issue containing the first installment). It's the second book in the series, a direct sequel to THE CURSE OF CAPISTRANO, which introduced Zorro to the world. There's no secret identity in this one. Zorro has already been revealed to the citizens of the Spanish settlement of Reina de as the young nobleman Don Diego Vega. In fact, as the novel begins, Zorro is retired, and Don Diego is about to marry the lovely young Señorita Lolita Pulido, much to the chagrin of his best friend Don Audre Ruiz and the other young firebrands who fought at his side in the first novel. They crave more excitement, but as Don Diego says at a dinner with his friends, "I am done with roistering and adventure."
Uh-huh. Sure you are, Diego.
It will come as no surprise to any of you that a couple of Zorro's old enemies from the first book are plotting with some pirates to raid and kidnap Lolita. They succeed in this but fail to kill Zorro, which of course is a big mistake. He sets out to rescue Lolita and bring the pirates to justice, with Audre and the rest of his cabellero friends following closely behind him.
That's it for the plot. What follows is a lengthy series of battles, death traps, near miraculous escapes, sea chases, a lot of galloping around on horseback, and swordfight after swordfight. It's all very reminiscent of one of those Republic movie serials.
In other words, I loved it.
It's a testament to McCulley's skill as an adventure writer that he could take a thin plot like this, spin it out to novel length, and still make it compelling and entertaining. The characters are pretty good, including the pirate captain who is plenty evil but still retains a certain code of honor, the gallant priest Fray Felipe, and the Falstaffian Sergeant Gonzales, who manages to be a good guy even though he's under the command of the villainous Captain Ramon. Lolita is an appealing heroine, too, who contributes quite a bit to the action despite her primary role as kidnap victim. Zorro himself is an iconic hero, of course, always laughing in the face of danger and swashbuckling for all he's worth. There's some genuine humor in the way he continually taunts and frustrates his enemies.
McCulley evidently intended for THE CURSE OF CAPISTRANO to be a stand-alone novel, but the success of the Douglas Fairbanks silent movie based on it, THE MARK OF ZORRO, prompted him to bring back the character. A lot of the action in this second novel seems to be written with in mind. I can just about see the scenes playing out in my head in glorious black-and-white.
I don't know if THE FURTHER ADVENTURES OF ZORRO was ever reprinted as a book (surely it was), but a new, inexpensive reprint taken directly from the pulp installments will soon be available from Beb Books. I thoroughly enjoyed this one. It might come across as hokey and old-fashioned to modern readers, but my inner twelve-year-old highly recommends it to those of you who have an inner twelve-year-old of your own. (You know who you are.)
Posted by James Reasoner at 6:00 AM

I'm not so sure that THE FURTHER ADVENTURES OF ZORRO has ever been reprinted as a book. I know that's hard to believe considering the fame of the character but I haven't found the book at all. I have the pulp serial but BEB's upcoming edition may really be the first reprint of the serial.

Black Dog Books also has a trade edition of this coming out in 2012.

A friend has offered to let me read his Argost All Story issues with this, but if Black Dog is coming out with this next year (and maybe more Zorro, Tom?) I'll wait and leave those tender pages unsullied by my touch.

If I recall, the correct spelling is "zoro," if they're calling him The Fox. I prefer the Zorro spelling.

The Curse of Capistrano released as The Mark of Zorro by Hollywood Theater of the Ear. It stars Val Kilmer, Ruth Livier, Meshach Taylor, Armin Shimerman and Elizabeth Pena.

The Further Adventures of Zorro released as Zorro and the Pirate Raiders by Colonial Radio Theatre.

Great review of this novel. I have read the Johnston McCulley novel but I have also read the A.J. Arneson version which is called Zorro & the Pirate Raiders. In this book, Zorro still has his secret identity. Otherwise, it is almost word for word. I am under the impression that Arneson had permission from Zorro Productions, Inc. to rewrite this novel. Arneson also did a rewrite of Zorro Rides Again, keeping Zorro's identity secret. As James Reasoner, in his review of this novel points out--Zorro had already exposed his true identity after The Curse of Capistrano. In these two following novels, McCulley gives us more Zorro adventures but it is awkward without his identity being secret. Still, they are all great reads.

As a character Zorro always seemed better suited for the screen than the printed page. Not only was there a three year gap between the first and second novels but a ten year gap between the second and third novels. Argosy beginning around 1928-1929 actively pursued adventure writers, like W. Wirt and encouraged others, like George F. Worts and Johnston McCulley to revive some of their earlier characters (Peter the Brazen and Zorro). Zorro appeared roughly once a year during the 30s, unlet their many other series characters which tended to appear more often. It wasn't until Zorro moved to West that it appeared on a regular basis.