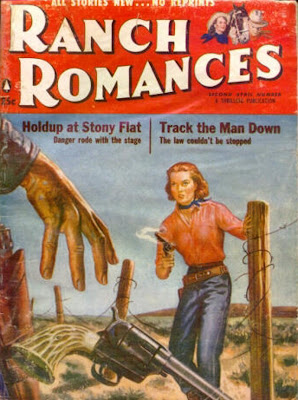 RANCH ROMANCES is the only pulp I remember seeing new on the stands, although by the mid-Sixties when I began to notice them, they had shrunk slightly from the standard pulp size and the page edges were trimmed. It didn't cease publication until the early Seventies, but by then it was all-reprint. I never bought an issue new. It had "romance" in the title, after all, and I wasn't interested in romance fiction.
It was only years later that I realized RANCH ROMANCES wasn't that different from all the other Western pulps. Most of the authors who wrote for it wrote for other Western pulps as well, although a typical issue of RANCH ROMANCES would include at least one female author who didn't show up in DIME WESTERN or WESTERN STORY (at least not under her own name). And all the stories had to have some sort of romantic interest in them, but that's nothing unusual. So did most of the stories in the traditional Western pulps. The biggest difference in RANCH ROMANCES was in the features that it ran, which leaned toward pen-pal requests, movie news (allegedly written by actor Bob Cummings, although I doubt if he penned a word of it), astrology columns, and relationship advice. The stories, though, were usually good, hardboiled action Westerns.
The lead story in this particular issue, which I own and read recently, is "Holdup at Stony Flats" by Clair Huffaker, and as I started reading it, it didn't take me long to realize that there was something very familiar about it. The protagonist is Jack Tawlin, a gunfighter recently released from prison, who gets involved with his brother and some other crooks in a scheme to hold up a heavily armored stagecoach carrying a fortune in gold. That's right, this novella is the story that Huffaker expanded into his novel THE WAR WAGON, which was subsequently turned into a pretty good movie starring John Wayne and Kirk Douglas. ("Mine hit the ground first," boasts to after a gunfight. "Mine was taller," drawls.)
I've read THE WAR WAGON, but it was many years ago. My impression is that other than the lead character's name and the basic set-up, "Holdup at Stony Flats" is considerably different. It's very entertaining, though. There's a good reason so many of Huffaker's novels were made into movies, often with screenplays that he wrote himself. He knew how to tell a fast-moving story with interesting characters and plenty of action. That's certainly true in this one. (And if you haven't read Huffaker's best novel, THE COWBOY AND THE COSSACK, you really should.)
Backing up Huffaker's story is a novelette by Robert J. Hogan, author of the bizarre World War I aviation series G-8 AND HIS BATTLE ACES, as well as a number of other aviation and Western yarns. "Track the Man Down" finds gunfighter Vermilion Smith (great name!) helping a young woman escape from a Paiute war party. Oh, and the woman happens to be the sister of a man Smith is sworn to kill. Although this story lacks the goofiness of the G-8 novels, it's told in the same clipped, fast-paced style and is very entertaining. They should have made this into an Audie Murphy movie. As I read it I kept thinking it would be a perfect vehicle for Audie, with its flawed, hardboiled hero and its effective and somewhat unexpected ending.
The short stories start off with one of those female authors I mentioned above, Dorothy Roseborough, who seems to have contributed stories only to RANCH ROMANCES during a career that lasted from 1947 to 1957. Her story "The Short Trail" is about a young woman and her alcoholic father who join a wagon train bound for and the trouble they encounter along the way. There's nothing at all ground-breaking about it, but it's a well-written and enjoyable yarn. Next up is "The Legacy of Happy Valley" by Teddy Keller, an author I hadn't encountered until now. It's a rancher vs. farmers story, but with the nice twist that the rancher is the only cattleman in a valley full of sodbusters determined to run him out. I liked this one quite a bit. I don't know if the author, Teddy Keller, was male or female, but while most of his/her stories appeared in RANCH ROMANCES, Keller also published some mystery stories, had a few appearances in men's magazines, and even published a science-fiction story in ANALOG, leading me to wonder if Teddy Keller is the only author whose work appeared in both RANCH ROMANCES and ANALOG. That seems possible to me. The final short story in this issue is "To the Last Man", a feud story by Ben Frank, an author whose work I'm on record as disliking. This forgettable story didn't change my opinion.
Overall, this is a good solid issue of one of the longest-running Western pulps. I may not have been a fan of RANCH ROMANCES when I was a kid, but I am now.
Posted by James Reasoner at 8:00 AM

RANCH ROMANCES was just about the last of the pulps, lasting until 1971. I never bought a copy either and when I started buying fiction magazines in the 1950's, they were all digest except for RANCH ROMANCES and SCIENCE FICTION QUARTERLY.

It's funny you mentioning THE WAR WAGON. The Western Channel has been running it and I just watched it last night. I found it to be amusing and full of action plus I like gatling guns.

A discussion over at the Facebook Western Readers group has brought up the large number of women among the readers of today's westerns. RANCH ROMANCES, as you describe it, shows this was already the case during the years of the pulps--this one actually outlasting all the rest of them. That's some fan base. Thanks, James.

Marian O'Hearn (no relation--it was a pseudonym), who wrote for RANCH ROMANCES and many of the other western romance magazines, had a story published by John W. Campbell in ASTOUNDING STORIES/ANALOG's sister magazine UNKNOWN.

I read several Huffaker novels many years ago, and enjoyed every one. Always meant to read more of him. Near the end of its run, I subscribed to Ranch Romances. Still have those copies. At that point, it was a traditional Western magazine. In fact, I think they finally changed its name to Ranch Romances and Adventures.

I never bought a copy of Ranch Romances new on the stands either as the Romance in the title was a thrill killer and I rarely read westerns in those days.

However, my late sister did buy them quite often and I have a stack of them from the digest days.

I did later acquire the September 24, 1954 issue which proudly announced that it was the third issue that September. It is listed as bi-weekly. The issue measures 9.25 inches by a hair under 7 inches with untrimmed edges.

The reason I purchased this copy was because it has a novelette by Seven Anderton "Sandhill Manhunt." I am perhaps the only collector of Seven Anderton (and curse the fact that so many of his Bluebook stories appeared in issues headlined by Edgar Rice Burroughs).

A bonus for this issue of Ranch Romances is that also has a story by Will Cook as its featured "novel" ("Fury at Painted Rock"). Cook is another favorite.

I actually bought a copy of Ranch Romances new. The reason? It had a story by Murray Leinster. So there's another author to appear in both magazines.