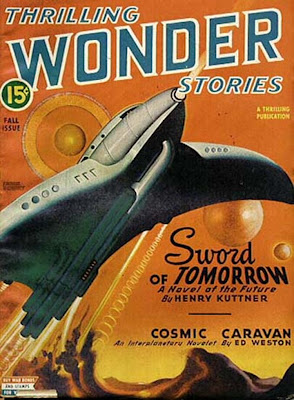 I enjoyed THE CREATURE FROM BEYOND INFINITY, that Henry Kuttner novel I read a few weeks ago, enough that I decided to read another one. "Sword of Tomorrow" originally appeared as a complete novel in the Fall 1945 issue of the pulp THRILLING WONDER STORIES. It never had a paperback reprint, but it's available as a free download in a number of places on the Internet.
Like a lot of pulp novels, "Sword of Tomorrow" is fairly short, more of a novella than a full-length novel, but that doesn't stop Kuttner from packing a lot into it. Not as much as in THE CREATURE FROM BEYOND INFINITY, mind you, but that one was really stuffed to the gills with plot. "Sword of Tomorrow" begins during World War II, with its protagonist, American fighter pilot , being held prisoner by the Japanese in a POW camp in . Could be related to , the hero of the previous Kuttner novel I read?  Well, sure, why not, although there's nothing in "Sword of Tomorrow" to indicate that. I like to think it's true, anyway.
But I digress. Ethan's captors torture him, trying to get him to reveal vital military information, so to thwart their goals, he puts himself into suspended animation using a technique that a fellow prisoner learned in a Tibetan lamasery. (Obviously, they know how to do all kinds of stuff in those Tibetan lamaseries.)  Court is being held in an underground dungeon, so when an Allied bombing raid late in the war destroys the prison camp, he survives, although he's still in his trance, with all his bodily functions slowed down enough that he sleeps on and on and on, for a thousand years or more before he finally wakes up.
Shades of Buck Rogers!  Kuttner has worked a clever variation of Philip Francis Nowlan's ARMAGEDDON 2419 A.D., although wakes up to find himself in a world on the verge of war, rather than already in the middle of one like Anthony Rogers. With his 20th Century knowledge of weapons, something that's lacking in this future world, Court is a valuable commodity and is soon caught up in a lot of dangerous political intrigue, as well as a romance with a beautiful redheaded queen.
As usual, Kuttner keeps things speeding along with numerous action scenes and an abundance of double- and triple-crosses. I'm usually pretty good at spotting twists, but there's one late in this yarn that took me by surprise, and it leads to a surprising and powerful ending. Kuttner does an especially good job of putting the reader inside Court's head and dealing with the shock and disorientation he feels when he wakes up to find himself a thousand years or more in the future.
"Sword of Tomorrow" offers another interesting aspect about midway through when Court finds himself trapped and has a series of hallucinations brought on by a machine that belongs to one of the plotters. This is a long scene, and the writing is much more vivid and colorful than that in the rest of the novel, which leads me to suspect it may have been written by Kuttner's wife C.L. Moore. I don't know that, of course, but it just reads like 's work to me, and they were famous for working on each other's stories.
No matter who wrote what, "Sword of Tomorrow" is a very entertaining yarn. If you enjoy pulp adventure SF like I do, you should check it out.
Posted by James Reasoner at 6:00 AM

You and George Kelley and I must have read the same memo about today's FFB since we're all doing good old SF stuff.

I will definitely look for this one. Such a great title too.

I have this pulp, and most of the other (non-Weird Tales) pulps that have unreprinted Kuttner stories. I just need to find time to read them. This one moved higher up the list.

I see this is a Bergey cover, even though there are no bug-eyed monsters or pin up girls. I looked through my copy and noticed that this is one of the last issues with the editor talking about drinking Xeno juice and hanging out with Snaggle tooth, Wart eyes, and Froggy. They disappeared effective with the Fall 1946 issues and even Sgt Saturn was banned soon after.

This particular issue smells great too. Thanks James, I'll be reading this story.