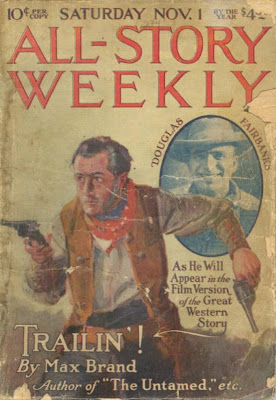 TRAILIN'! is one of those odd hybrids, a Western contemporary with the times in which it was written.  In fact, it opens in , at a Wild West Show in , and has the hero, young Anthony Woodbury, leaping into his car after the show for a fast drive out to his father's estate on .
But from there, things change in a hurry.  While at the Wild West Show, Anthony has accepted the challenge offered up by a Westerner and ridden a wild bucking bronco.  You see, despite his Eastern upbringing, Anthony has always been interested in riding and shooting and such Western pursuits.  When he gets home, it's not long until his father is accosted by a mysterious stranger and killed in a Western-style gunfight.  Anthony sets off after the stranger, which is where the title of the novel comes in, and of course the trail leads west to the "mountain-desert" in which nearly all of Max Brand's Westerns are set.
TRAILIN'! uses the old "tough tenderfoot" plot to great effect, as Anthony uncovers secrets about his father, the mysterious killer, and his own heritage.  Any modern reader is going to see the book's big revelation coming very early on, but at this late date you shouldn't expect to read Max Brand and be surprised. 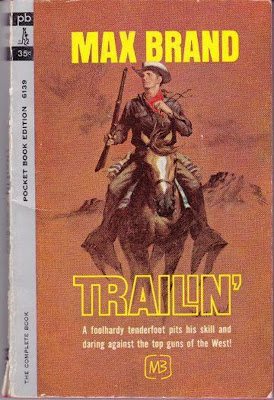 No, you should read the work of Frederick Faust, the real name of Max Brand, for the distinctive prose that makes him almost a genre unto himself, for the breakneck action scenes, and for the sheer emotional torment he puts his characters through.  Faust can really pile on the angst, but he breaks it up well with gunfights, fistfights, and desperate chases, usually on horseback.
TRAILIN'! is a little long for its plot, but to Faust's credit, he kept me reading anyway.  His best work was in the novella length, I think, but I've enjoyed all of his full-length novels that I've read.  Originally published in the pulp ALL-STORY WEEKLY in 1919, this is only Faust's second novel, following his debut THE UNTAMED.  If you're a Max Brand fan, it's well worth reading, and if you've never sampled Faust's work, it wouldn't be a bad place to start.  It's as old-fashioned as it can be, but sometimes that's exactly what I want, so I enjoyed it a great deal.
Posted by James Reasoner at 6:00 AM

Thanks for this review of TRAILIN' by Max Brand. I have the serial in the ALL STORY issues and I may reread it soon. I have mixed feelings about Faust; he wrote so much and wrote very fast, so some of his work I like alot, some I think is mediocre, and some I can't finish.

For most of my pulp collecting life I had friends who loved the work of Frederick Faust. Now most of them are dead and I don't see as many readers of his work as I used to.

Like Walker, some Faust I love, and some I couldn't finish --though I think it was more my mood at the time than the prose. This sounds like a rollickin' good time. Is the story actually set in 1919?

No specific date is ever given, but the opening section set in New York certainly reads like it's set around 1919. But once the protagonist gets off the train in an unnamed Western state, that's it for the modern references. Everybody rides horses and there's no mention of cars, highways, phones, etc. Which makes for sort of an odd dichotomy, but that's Faust for you.

This book is in the collection of Brand novels I bought on Kindle.

Oh for the days when you could jump in your roadster in Manhattan and make a quick trip to Long Island. I've been lucky reading Max Brand, no duds so far, though I can read a collection of his short stories and they can seem like they're from very different writers. His style can veer all over the place.

Having read a Swedish translation of a Max Brand story without knowing the original titel, I will here describe the story and see if any of you guys can recognize it. Wayne Staple returns from the east to his fathers ranch in Sierra Nevada, the Sliding S in Black Bear Valley near the Nevada border. There is some feuding with the adjacent ranch ran by the Orrindorf family. Seems both patriarchs have fell in love with a young Mexican girl of the gold digger kind. Wayne falls in love with the girl Fern Utley that is associated with one of the Orrindorf brothers. Wayne shoots the gunman Johnny Cuesta. It all ends upp with Wayne returning back east taking the Mexican girl with him. I have checked all the more well-known Brand westerns, but so far without any match. Any clues?