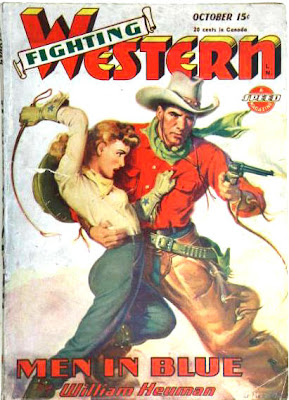 As you can tell from the "Speed" logo on the cover, this pulp was published by Trojan, the same company that published SPICY WESTERN and its later incarnation SPEED WESTERN. As such, it's not surprising to find Laurence Donovan as one of the contributing authors. He wrote a lot for the Spicy/Speed imprints. Other authors in this issue include William Heuman, whose work is always good, and a couple I'm not familiar with, Charles Handley and Max Neilson. I like the cover fairly well, although I'm not sure how politically correct it is. (Political correctness isn't something you'd expect from the pulps, especially those published by Trojan!)
Posted by James Reasoner at 7:00 AM

I like the cover also. But it looks like the girl is holding her own by kneeing the guy in the groin and slashing him with her whip.

I've had trouble with most of the stories I've read in SPICY/SPEED/FIGHTING WESTERN. I prefer the fiction in the major western titles like WEST, WESTERN STORY, STAR WESTERN, DIME WESTERN.

Maybe it's the attempt to add a sexual angle to many of the stories that just doesn't ring true? Even WESTERN STORY often had the pretty girl but SPICY WESTERN and the other Trojan pulps definitely stressed the risque theme.

Always know it's Saturday when I see those covers.

For the most part I like the stories in the various Trojan titles, but it's definitely better to space them out and not read too many at a time. And I do think the formula worked a little better in the detective and adventure stories than it did in the Westerns.

That girl is knocking a scorpion off the man's arm therefore allowing him to safely shoot his six-gun and protect the girl.

Get it? Okay, maybe not.

George Rozen, of Shadow fame, painted a number of covers for Culture/Trojan for their Westerns titles and for Private Detective in the waning years of the pulps when other possible work assignments were disappearing.