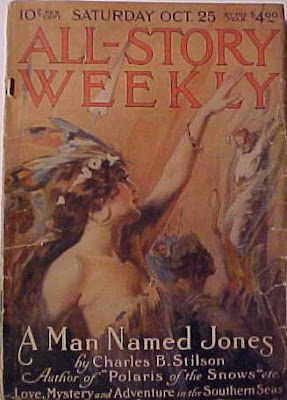 (This post originally appeared in somewhat different form on August 28, 2005.)
Charles B. Stilson's A MAN NAMED JONES has an unfortunately bland title since it's actually a pretty good adventure novel. The title character is a young man who inherits a fortune from his father and therefore never has to work, so he becomes a rather dreamy sort, holed up in an apartment with a bunch of books. Then one day (and you knew something like this was coming), an old friend from college shows up with a fabulous uncut emerald, a photograph of a beautiful girl, and an enigmatic tale of adventure in the . The old friend conveniently drops dead, Jones becomes obsessed with finding the girl in the photograph, and before you know it he's off to the South Pacific where all sorts of exciting things happen.
This has all the makings of a classic adventure story, and the fact that it never quite rises to that level can be traced to the fact that Stilson doesn't have the storytelling ability of an Edgar Rice Burroughs or H. Bedford-Jones, two authors who were already at work when this yarn was published in 1919. The pace is a little slow, especially in the first half, and the writing is pretty stilted at times. The second half is a corker, though, with plenty of action and some vivid, well-written scenes. I would have loved this book if I'd first read it when I was fifteen or so. As it is, I found it enjoyable and will definitely read the sequel, the better-titled .


(Unfortunately, I never got around to reading LAND OF THE SHADOW PEOPLE, and at this late date, I doubt if I ever will.  But I believe that it and this novel are still available from our friends at Beb Books.  Also, the issue of ALL-STORY WEEKLY in which this serial began came out a week before the issue containing the first installment of Max Brand's TRAILIN'!, which I wrote about last week.  If I'd thought about it, I would have switched them around so the pulps would be in proper order, but it didn't occur to me.)
Posted by James Reasoner at 6:00 AM

The Land of the Shadow People is the better story, I think. It has travels through Peru to the headwaters of the Amazon in search of kidnappers,, a fabulous emerald mine and a race of people with astonishing camouflage powers.

Sounds like I need to read LAND OF THE SHADOW PEOPLE after all. I think I remember the first story well enough to pick up the characters again.

I have both these serials in ALL STORY but I've yet to read them. Perhaps, as James mentions, the title of the novel, A MAN NAMED JONES, is too bland. But they certainly sound interesting, so I'll put them on my busy reading schedule(I just finished Max Brand's THE WHITE INDIAN in ARGOSY which was excellent).