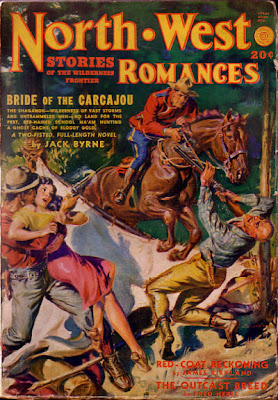 I've always considered Northerns to be a sub-genre of Westerns, and hey, this pulp even has "West" in the title, so I think it counts. While I don't read nearly as many Northerns as I do traditional Westerns, sometimes I'm really in the mood for some yarns about Mounties and cheechakos and mushing over the pass. This particular issue has a Norman Saunders cover, too, so you can't go wrong there. Unfortunately, I don't own a copy, so I can't read it, but I can enjoy the cover and you can, too. Jack Byrne, who wrote the lead novel, was best known as an editor (he bought a lot of Robert E. Howard's boxing stories while he was at Fiction House, and he was the editor of ARGOSY during one of its best runs during the mid-to-late Thirties), but he also wrote quite a bit of pulp fiction in a variety of genres. I haven't read much by him, but I've enjoyed what I've sampled so far. Fred Nebel, also mentioned on the cover, was Frederick Nebel the hardboiled detective writer, author of the Cardigan stories and the Donahue stories, all of which are great stuff. I've read a couple of Nebel's Northerns, and they're very good, too. The other authors in this particular issue -- James Kirkland, Evan Slyter, Dan O'Rourke, A. deHerries Smith, Derek West, and Owen Finbar -- are all unknown to me. Some of them may be house-names for all I know. Still, with stories by Nebel and Byrne, I expect this issue was worth reading.
Posted by James Reasoner at 8:00 AM

This magazine is worth collecting just to get the Fred Nebel stories. He had quite a few during the 1930's. I like the covers also; always full of action and during the 1940's, kind of sexy.

Thanks, James. Another good one. The early "Northern" novel makes an interesting contrast with the early westerns. There's a Canadian element of measure and restraint, and often a sense of cultural superiority to the goings-on south of the border.

I've read a bunch of James Oliver Curwood's Mountie tales. Seems like a certain number of his tales got turned into Republic Westerns.

James, that's a beautiful cover. So many luscious oil paintings from those days, and I imagine many of them ended up in the furnace. (Recalling a story of a visitor to Ditko's apt. watching him use old Spidey pages as a cutting board.)

Ron, I sensed a little of that in "Man Size" by Raine (not sure where that title falls in the Northern/Western divide).

Dan O'Rourke, included in this issue of North-West Romance, was an 18-year veteran of the R.C.M.P. and turned to penning Mountie and other North Woods fiction. He wrote a fair amount for Fiction House starting in the late 1920s with nonfiction articles in North•West Stories then submitting short tales based upon his own experience.

For anyone interested, I will be releasing in a few months an as-of-yet-unannounced large anthology entitled THE SCARLET PATROL which collects Mountie fiction from many pulps magazines including Adventure, Blue Book, Argosy, Frontier Stories, Short Stories, North•West Stories.

Some of the authors include Frederick Nebel, Sgt. Dan O'Rourke, , R.C.M.P., Sewell Peasley Wright, J. Allan Dunn, James B. Hendrix, Harwood Steele, Walt Coburn, Bertrand W. Sinclair and Ralph Delamere Keefer, R.C.M.P. among others, Check www.blackdogbooks.net for announcements and updates for this an other new titles.

Tom, you can count on me to buy this latest Black Dog collection. I'll see you at the Windy City Pulp show and be looking for it on your tables. You are doing some excellent pulp reprints.

Tom,
I have only one word to say about the announcement of THE SCARLET PATROL: "Yay!"