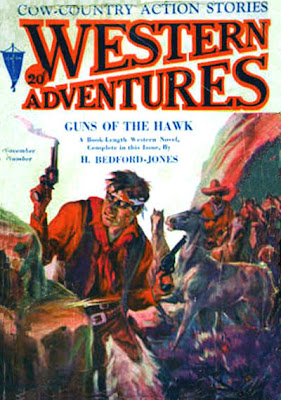 In the Forties, Street & Smith also published a pulp called WESTERN ADVENTURES that was a companion magazine to WESTERN STORY and WILD WEST WEEKLY. This issue is from an earlier incarnation published by Clayton, and look at the line-up of authors:  H. Bedford-Jones and Erle Stanley Gardner (two of the writers known at one time or another as the King of the Pulps; if they'd just had Frederick Faust in there, too, it would have been a hat trick), plus Johnston McCulley, Stephen Payne, and James W. Routh. That's a high-powered bunch of pulpsters. The cover's not great, but it's colorful, and with those authors I would have picked up this one without hesitation if I had the two dimes to spare.
Posted by James Reasoner at 7:00 AM

I like the Clayton pulps alot but they are getting very hard to collect. Back in the 1980's I managed to build up extensive runs of two of their best titles: ACE HIGH and COWBOY STORIES. H. Bedford Jones and Walt Coburn were two writers that Clayton used alot.

All the many Clayton titles ceased when the company went out of business in 1933 but many of the magazines were continued by Street & Smith and other publishers. The most famous being ASTOUNDING STORIES.

Harold Hersey in his excellent book, PULPWOOD EDITOR, discusses the life and death of the Clayton chain of magazines.

Walker, I like Walt Coburn and am currently reading a paperback novella of his called VIOLENT MAVERICK. Hope to do a post on him soon.

Unlike comics, which were always a dime until the '60s (except for special issues), I notice that pulp prices had a bigger range from 10 cents to at least 25 cents in some cases. What was the limit? Any 50-cent pulps?

Richard, I hope to read your post on Walt Coburn, another tragic figure that decided to hang himself rather than suffer disease and illnesses associated with old age.

Concerning your question about pulp cover prices, the range was 10 cents to 25 cents during the pulp era of 1900-1955. There were odd exceptions like NICKEL DETECTIVE and the 50 cent AMAZING ANNUAL.

I've read STIRRUP HIGH and enjoyed it, but none of Coburn's fiction.

STIRRUP HIGH is my favorite of Coburn's books that I've read so far. It's supposed to be a memoir, but I have a feeling that at least some of it is fiction. His novels and stories are very inconsistent, but usually the earlier in his career, the better. By the late Forties his drinking was taking quite a toll on his work. Even then, though, he was capable of turning out some really good stuff from time to time. At his best he's one of my favorites, with a real air of authenticity about his writing.