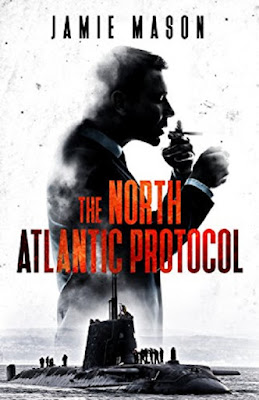 Regular readers of this blog know that I have a great fondness for good, old-fashioned secret agent yarns of the type that were so popular during the Sixties and Seventies. I also enjoy nautical adventures. Throw a little history in, too, and I’m a very happy reader. That explains why I thoroughly enjoyed THE NORTH ATLANTIC PROTOCOL by Jamie Mason.

This story is told from the point of view of a British submarine commander who’s ordered to deliver a mysterious agent known only as the Warlock to a designated point in the far North Atlantic where, as far as anybody knows, there’s not anything. On the same mission, the British sub is supposed to rendezvous with a Russian counterpart for a goodwill/public relations meeting. Well, you know there’s got to be a lot more to it than that, and the two missions are bound to intertwine more than they appear to at first . . . and you’d be right. There’s an island that’s sometimes there and sometimes not there, and a hatch leading into an underground bunker filled with sinister equipment, and an enigmatic hero in the Warlock who, evidently, is also more than he seems to be at first.

I don’t mind telling you, I had a big grin on my face as I read this book. It’s a contemporary thriller but has a tone reminiscent of Ian Fleming and Alistair Maclean (early Maclean, when he was still one of the best thriller writers ever). The Warlock is a James Bond type of character, while the sub commander reminded me of Maclean’s tough, courageous, but more down-to-earth protagonists. Mason blends the two of them expertly and keeps the action moving at a very nice pace. I had a great time reading THE NORTH ATLANTIC PROTOCOL, and if your taste is anything like mine, I think there’s a good chance you would, too. Highly recommended.

Posted by James Reasoner at 8:43 AM

Kind of a turn-off of a cover for non-smokers though.