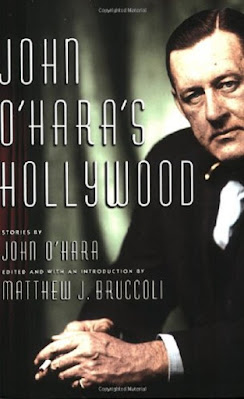 (This post originally appeared in somewhat different form on June 17, 2007. The book I'm reviewing here is what started me on a John O'Hara binge that lasted, on and off, for the next few years.)

I haven’t read much of John O’Hara’s work. I remember reading his first novel, APPOINTMENT IN SAMARRA, some years ago and enjoying it, and I’ve read a few of his short stories here and there. When I came across this collection of his novellas and short stories set in Hollywood, I decided to give it a try, and I’m glad I did because it’s a pretty good book.

O’Hara worked in Hollywood off and on for most of his career, working on original stories and screenplays for films, most of which were never produced. He was enough of an insider that the stories in this volume really ring true when it comes to the actors, producers, directors, writers, and agents of the studio system during the Twenties, Thirties, and Forties, which is the era in which most of the stories are set, even the ones that were written much later. He wrote great dialogue, too, and was very observant of people’s foibles and failings.

The knock I have on some of these stories is that nothing much happens in them, and no matter how slick the prose is, I want some plot to go along with it. But some of them -- “In a Grove”, “Yucca Knolls”, “James Francis and the Star”, and “Natica Jackson” -- are wonderful tales, alternating between wry humor, unexpected twists, and some of the bleakest situations this side of Jim Thompson and David Goodis. It also seems at times that O’Hara is a little too obsessed with the sex lives of his characters, but in morality plays like most of these stories are, I guess it’s difficult to avoid that.

One more complaint -- and this has nothing to do with the stories themselves -- is how poorly edited this volume is, with numerous typos and an introduction that credits THE LAST TYCOON to Budd Schulberg and WHAT MAKES SAMMY RUN to F. Scott Fitzgerald, when of course it’s the other way around. A fairly inconsequential mistake, but somebody should have caught it.

Overall, though, I enjoyed JOHN O’HARA’S HOLLYWOOD quite a bit, and it’s made me want to read more of O’Hara’s work. I even picked up a biography of him the other day, to learn more about his life. Don’t know when I’ll get around to reading it, but I’m confident that I will.

(I'm pretty sure I did read that biography, but I don't appear to have blogged about it. And all I really remember is that O'Hara was an unpleasant sort who was obsessed with the fact that he wasn't famous enough and never made enough money from his work. But I read several of his novels and more short stories and always enjoyed what I read by him. If I had more time, I might try one of his novels again. One of these days. Meanwhile, JOHN O'HARA'S HOLLYWOOD is still in print. Maybe by now they've fixed those little glitches I mentioned above.)

I have never heard of this before but am most interested in it. Thanks!

Good choice! I've read literally hundreds of O'Hara's stories, but not many of his novels. I've read biographies and critical works about him too. As you said, an unpleasant person, but I like his writing. The late Bill Crider was a fan, and recommended FROM THE TERRACE (among others), but it's sheer size has kept it unread on my shelf.

I remember Bill recommending a collection called THE HAT ON THE BED (I think), and I'm pretty sure I read that one. I want to read FROM THE TERRACE and BUTTERFIELD 8, but who knows if I'll ever get around to them.