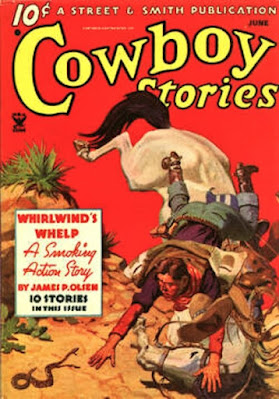 Well, this cowpoke has all kinds of problems, what with being thrown off that horse and having a rattlesnake waiting for him on the ground. I don't know the artist, but he's painted a scene I wouldn't want to find myself in. Inside this issue of COWBOY STORIES are yarns by plenty of good writers, though, including James P. Olsen, W. Ryerson Johnson, Wilfred McCormick, S. Omar Barker, Carmony Gove, and Galen C. Colin. COWBOY STORIES was a long-running Street & Smith pulp, never as popular as WESTERN STORY or WILD WEST WEEKLY but with consistently good covers and authors.
Posted by James Reasoner at 8:22 AM

F. Orlin Tremaine edited COWBOY STORIES in addition to TOP-NOTCH, CLUES DETECTIVE, and ASTOUNDING STORIES. You will see some of the same writers in those magazines: Murray Leinster, Robert E. Howard, Donald Wandrei.

Would be a treat to read a REH western, by Crom!

Two of my top three favorite Robert E. Howard stories are "The Vultures of Wahpeton" (a traditional Western--sort of) and "Wild Water" (a contemporary Western). And as for the third story in my top three . . . why, that's "Beyond the Black River", which, as far as I'm concerned, is also a Western transplanted to the Hyborian Age.