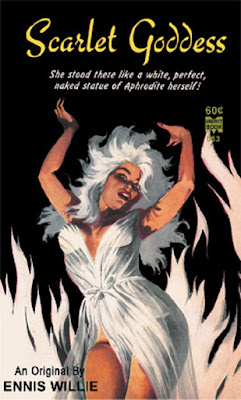 (This post originally appeared in somewhat different form on June 1, 2007.)

I believe SCARLET GODDESS is the novel that introduced Ennis Willie’s iconic hardboiled character Sand, a former top man in the Syndicate who leaves organized crime despite the fact that doing so means there will always be a price on his head. [UPDATE: Wrong! I think it's actually the final Sand novel, although I'm not sure about that, either.] That’s already happened when this book opens, so it’s not really an “origin story”, so to speak. Sand agrees to deliver a mysterious package for a friend and former Syndicate associate of his, and that proves to be a mistake. Before he can get the package to its destination, it’s stolen from him and he finds himself in a violent mess involving a serial rapist/killer known as the Sasquatch, a cult of Satan-worshippers, and a gigantic fire-opal called the Devil Stone that carries a deadly curse with it. The story rockets along at a fast pace to a fiery, apocalyptic climax.

It’s easy to see that Ennis Willie’s work was a big influence on James Dockery, the author of those early novels in the Butcher series. Their styles are very similar. Willie’s prose is considerably smoother and more polished, and despite the bizarre subject matter is more grounded in reality than Dockery’s. SCARLET GODDESS is sexy, violent, and a real pleasure to read. Ennis Willie’s work deserves to be back in print, and I’m glad that efforts to insure that are underway. [UPDATE: Yes, several of the Sand novels have been reprinted by Ramble House since then, in the volumes SAND'S WAR and SAND'S GAME, but we need more Ennis Willie reprints!]