The Legion of Lazarus - Edmond Hamilton 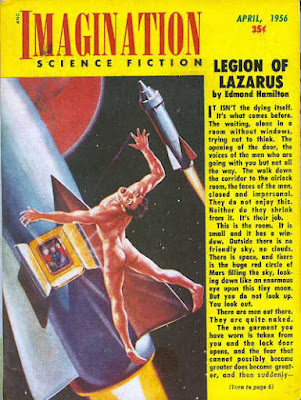 I’ve been a fan of Edmond Hamilton’s science fiction since reading his Starwolf novels in the Sixties, followed by the paperback reprints of some of his Captain Future pulp novels. Actually, I’d read and enjoyed some of Hamilton’s work before that—his Superman stories published in the comic books—but I didn’t know that at the time. Over the decades since, I’ve read many of his novels and stories in various anthologies, including the highly recommended Del Rey collection THE BEST OF EDMOND HAMILTON, edited by Hamilton’s wife, writer Leigh Brackett.

All of which brings us to the most recent work by Hamilton I’ve read, the short novel THE LEGION OF LAZARUS, which was published in the April 1956 issue of the science fiction digest magazine IMAGINATION. Hamilton contributed a lot of stories to IMAGINATION and its sister publication, IMAGINATIVE TALES, during the Fifties.

THE LEGION OF LAZARUS is a “lost loot” yarn, a plot common in Westerns and hardboiled crime novels. You know how it goes: a criminal, or an outlaw gang if it’s a Western, stashes either a lot of money or something worth a lot of money and then is either killed or caught and sent to prison. Years later, various factions, sometimes including the original thief, try to locate the loot and fight over who’ll get their hands on it first.

In this case, the lost loot is a cache of Titanite, a rare element found only on Saturn’s moon Titan, which is the last thing needed to power an interstellar drive that will allow mankind to escape our solar system. The protagonist, who was found guilty of murdering the guy who stole the Titanite in the first place, has been on ice for the past fifty years—literally. The justice system doesn’t execute murderers anymore, it freezes them for fifty years and then brings them back to life. Hence the reference to Lazarus in the title. But an unintended by-product of this process is that it gives the Lazarites (as they call themselves) the ability to communicate telepathically, along with other mental powers.

When our hero, who’s actually innocent of the crime for which he was convicted (another common hardboiled crime novel element), wakes up after his fifty years of punishment, he has to clear his name, find the loot, and navigate the treacherous waters of the various groups who want him and the Titanite. Hamilton establishes all this pretty quickly and then never lets the action flag in what’s basically a chase yarn across the Solar System.

I thoroughly enjoyed THE LEGION OF LAZARUS. Hamilton packs it so full of concepts that it probably would have been a thick 150,000 word novel these days, as opposed to the lean 30,000 or so it actually is. I much prefer galloping through a yarn like this instead of slogging through some doorstop. An e-book version is available for free on Amazon, and there are several inexpensive paperback editions to be found, as well. The Forties and Fifties remain my favorite era for science fiction, and if you enjoy SF adventures from those days, I give THE LEGION OF LAZARUS a high recommendation.