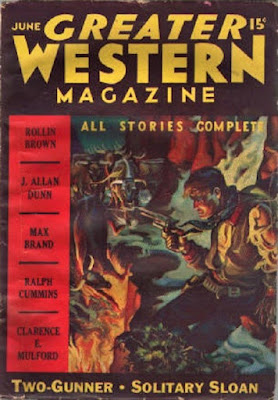 Considering the five authors in this issue of GREATER WESTERN MAGAZINE, all with new stories, apparently, it's a little odd who gets top billing on the cover: Rollin Brown. Now, as far as I know, Brown was a prolific, well-respected Western pulpster who ghosted for Ed Earl Repp as well as writing a lot under his own name. But deserving of top billing over Max Brand, Clarence E. Mulford (with a Hopalong Cassidy story, to boot!), and J. Allan Dunn? I wouldn't think so. The fifth author is Ralph Cummins, also a prolific, long-time pulpster but not a household name then or now.
Posted by James Reasoner at 6:30 AM

Never heard of this before, and like you, am surprised by the top billing for Rollin Brown. Were the other stories reprints?

The Fictionmags Index shows them all as being new.

So perhaps it should have been called "Lesser Western Magazine". Serious question: why would Ed Earl Repp use a ghost writer? Did he have a regular gig like Lester Dent or Walter Gibson writing a series? Or was his name so sellable at that point that he farmed out some of his assignments to writers like Brown. Love your blog, by the way. Thanks.

Ed Earl Repp never had a Western series that I recall, but I believe he wrote at least one series in the science fiction pulps. But his work was very popular and in demand among Western pulp editors, so he used a series of ghost writers to increase his production and his income. His two main ghosts were Frank Bonham and Tom W. Blackburn, but Rollin Brown and James Charles Lynch were others who wrote for him. Jon Tuska claimed that Repp never wrote anything on his own, but I don't believe that. I think he wrote at least the handful of novels credited to him and probably quite a bit of the pulp work, too. Frank Bonham wrote a great autobiographical essay about ghosting for Repp called "Tarzana Nights", which can be found in his collection ONE RIDE TOO MANY. Used copies are available very inexpensively on Amazon, and the book is worth it for that essay alone, although the stories in it are very good, too. I appreciate the kind words regarding the blog. I intend to keep at it.