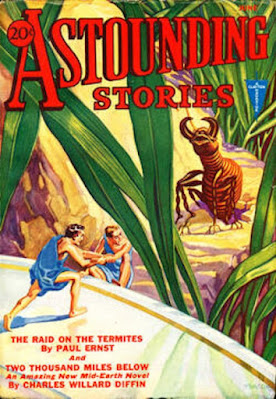 I’ve read quite a few of Clifford D. Simak’s stories and novels over the decades without ever considering him one of my favorite science fiction authors, but on the other hand, I’ve never read anything by him that I didn’t enjoy, either. His novelette “Hellhounds of the Cosmos” is the earlier Simak story I’ve read, and it’s one of his earliest, period. It was only his fifth published story when it came out in the June 1932 issue of ASTOUNDING STORIES, while it was still a Clayton pulp edited by Harry Bates.

I admit, the title is what first attracted me to this yarn, along with the fact that there’s a free e-book version of it available on Amazon. But I quickly got caught up in a story that’s really wild and over-the-top compared to the low-key, often rural, homespun SF for which Simak is known. In this one, the whole earth is under assault from fearsome, midnight-black, amorphous creatures that appear seemingly out of nowhere, slaughter a bunch of people, and then disappear equally mysteriously. The newspaper reporter who’s the protagonist (a character type that is common to Simak’s work, since he was a journalist himself) interviews an eccentric professor who claims to know what’s really going on. The reporter not only gets the scoop, he becomes part of it himself when he gets caught up in the effort to fight back against these vicious invaders who have to be defeated before humanity itself is wiped out.

Does any of the science in this story make a lick of sense? Well, not really. The professor’s long-winded explanation is the sort of thing you ran into in science fiction all the time in those early days, pure handwavium. (Come to think of it, handwavium is a pretty common element in current SF, too.) But Simak makes it sound plausible, and boy, the end result is a lot of fun, especially the battle royale that makes up the second half of the tale. Then, at the last minute, Simak springs a twist that took me completely by surprise and is very effective.

I really enjoyed “Hellhounds of the Cosmos”. If you’re a fan of early science fiction and haven’t read it, you ought to. If you’ve only read SF published in the past twenty years or so . . . well, you’re probably not reading this blog to start with.

I really like both Simak and early science fiction, but I haven't read this one. I need to correct that oversight.

I just read Simak's "The Loot of Time" from THRILLING WONDER STORIES. I enjoyed the time travel to the Pleistocene with time traveling aliens engaged in heists through time. There is a zest to 1930s science fiction that was lost in WW2, especially after the atomic bomb. I find much of 1950s science fiction to be depressing if not downright nihilistic (I'm looking at you Philip K. Dick).