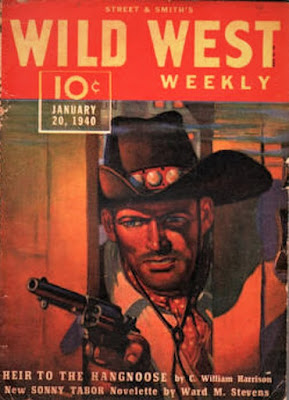 An unusual cover with that red tone, but I think it's quite effective. The artist is Richard Case. As usual with WILD WEST WEEKLY, there are some good authors on hand in this issue, including one of the magazine's all-time stalwarts, Paul S. Powers, with a Sonny Tabor novelette under his Ward S. Stevens pseudonym. Also in this issue are C. William Harrison with two stories, one under his name and one under the house-name Nelse Anderson, William F. Bragg, John A. Saxon, and Charles N. Heckelmann.
Posted by James Reasoner at 5:51 AM

Wild West Weekly has always been a bit of a guilty pleasure of mine. Most specially the Powers’ series Kid Wolf and Sonny Tabor. Other author’s series such as Silver Kid and Rusty McKee are good time killers. Know the quality wasn’t the greatest but fun stuff.

By the way, work eased up and let me do some binge reading last weekend. Read both novels in the new Childs/Preston series. Old Bones (Donner party related) was great fun but the next, Scorpion’s Tail was not good despite involving my favorite topic, missing Spanish treasure. I also binged through your “Outlaw Ranger” series, James, and it was great. Kept me up late as I could not put it down.

Thanks for the kind words on the Outlaw Ranger series. It's going to be relaunched and there'll be new novels in the series in the reasonably near future, I hope.

Talkin' about missing Spanish treasures have you read G.D. Shitrreffs novels such as: "Barranca", Maximilian's Gold, Hell's Forty Acres,
The Walking Sands and his juveniles: The Haunted Treasure of the Espectros, Mystery of the Lost Canyon and The Secret of the Spanish Desert? Good stuff!
Best,
Tiziano Agnelli

Tiziano, I have read all of the above. Shirreff is terrific and his desert novels are the best. I even tracked down the juveniles over the years (and wound up overpaying for one that was just retitled).

Only better lost treasure writer is Dobie and his “legends” books.

Shirreffs is a long-time favorite. I read those juveniles when I was a kid and loved them. I have one or two of them now and plan to reread them sometimes, but who knows if I'll ever get around to it.

Spike,
I was a personal friend of the late G.D. Shirreffs, visiting him in Grenada Hills (CA) back in '88, and I always remember the two books
he appreciated most as primary source for his novels were: "Apache Gold and Yaqui Silver", 1939 and "Coronado's Children", 1930 by J. Frank Dobie. A real harvest of useful informations.
I miss "Gordie" very much!
Best,
Tiziano Agnelli

Tizano, that is fascinating. No wonder I like Shirreffs treasure novels so much. Dobie’s works have been a constant companion over the years.