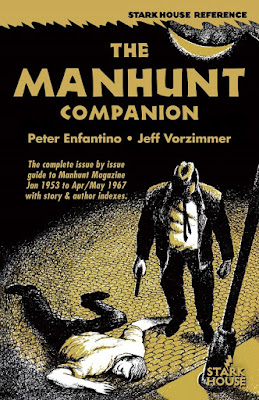 Following the success of their great anthologies THE BEST OF MANHUNT and THE BEST OF MANHUNT, VOLUME 2, Stark House soon will be publishing THE MANHUNT COMPANION by Peter Enfantino and Jeff Vorzimmer. This book contains a history of the magazine, indexes of authors and stories that MANHUNT published, plus reviews of every story from every issue. I'm not sure anything like this has ever been attempted before, let alone pulled off in such great style. I may not agree with every review, but they're all entertaining and informative and present a compelling picture of what's regarded (rightly so) as the top crime fiction digest of the Fifties. But MANHUNT lasted well into the Sixties, and Enfantino and Vorzimmer don't shy away from its slow decline, either, although there were still some very good stories to be found in those later years. Overall, if you're interested in crime fiction and/or digest magazines, there's plenty here that you'll find enjoyable and enthralling. I give THE MANHUNT COMPANION a very high recommendation. (And while you're at it, if you haven't read the two BEST OF MANHUNT volumes, I can't recommend them highly enough, either. They're great books.)
Posted by James Reasoner at 6:00 AM

Imagine how many volumes necessary for WILD WEST WEEKLY...

I don't recall (and haven't read it) if A REQUIEM FOR ASTOUNDING did a similar taxonomy on the early decades of ANALOG...

Breathes there a reader who would be consistently interested in all the conten in all the forms that the US ARGOSY took? Possibly. (I would be Very Mildly Interested in all of it...but can think of other magazines that I'd prefer to devote my time thus to, if I was to take on such a project...leaving aside those that were good and short-run.)

Sweet! Thanks for the heads-up.

Tackling ARGOSY or WILD WEST WEEKLY in similar fashion would be monumental undertakings, all right. I'd have some interest in both. I think it would require teams of readers and reviewers.

I'd love to see similar tomes for Hitchcock, Queen, and Shayne as well. I've started an annotated Hitchcock book on the first twenty years but as you say, James, it's a project designed for more than one reviewer. 240 or so issues is going to take me quite a while amidst my other projects. Stark House and Jeff Vorzimmer happened to catch me in the middle of writing that book on Manhunt. About 25% of the book was written by April 2020 (when Jeff contacted me) but then the deadline forced me to read the remaining 80+ issues in just six months. Thank goodness Jeff was in charge of the index and introductions as that's not really my cup of tea. And thanks, James, for getting the word out everywhere.

Peter Enfantino is the world's biggest expert on Manhunt and I'm eagerly awaiting this book since I think Manhunt is the best hard boiled crime fiction digest magazine. Now we need a big collection and a big companion on the Manhunt imitators! They published some good fiction every now and then as I'm finding out while reading Robert Silverberg's Rough Trade, a collection of his stories for Guilty and Trapped.