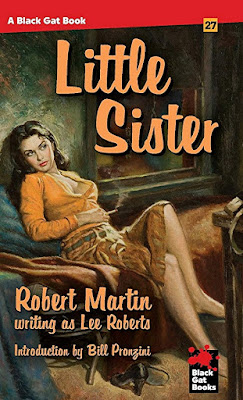 I remember reading some of Robert Martin’s novels featuring private detective Jim Bennett many years ago and liking them quite a bit, but I hadn’t read anything by him for a long time. If I was aware that Martin also wrote mysteries under the name Lee Roberts, I had forgotten it until recently when I received a review copy of his novel LITTLE SISTER, soon to be reprinted by Black Gat Books.

According to the fine introduction by Bill Pronzini, LITTLE SISTER is an expansion of the novelette “Pardon My Poison”, which appeared under Martin’s real name in the April 1948 issue of the pulp DIME DETECTIVE. The protagonist in that version is private detective Lee Fiske, but for the novel version, published by Gold Medal in 1952 under the Lee Roberts by-line, Fiske’s name changes to Andy Brice, but he’s still a private eye. And in classic private eye fashion, he’s hired by a rich, beautiful blonde to handle a mess involving her beautiful, wayward, 17-year-old little sister, who’s gotten herself into more trouble than anyone knows when the book opens. Brice quickly figures that out, though, when the girl shows up drunk—or was she drugged?—with the corpse of a murdered young man in the trunk of her car. 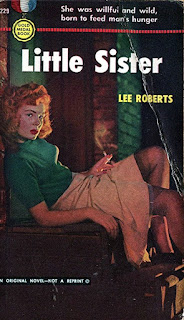 That grisly discovery kicks off a fast-paced couple of days in which two more murders take place, Brice is almost bumped off himself (more than once), and, again in classic private eye fashion, every gorgeous babe in sight throws herself at him. Money and passion both turn out to be motivating factors in this complicated affair, but Brice navigates through all of it in a rather low-key manner, wisecracking a little but not going overboard with it, cooperating with the cops (most of the time), and finally untangling everything to uncover a killer.

LITTLE SISTER is a really well-written book with a lot of nice lines, and Brice is a very likable protagonist/narrator. Reading this novel took me back to the days of high school and college when I was eagerly devouring every private eye yarn I could find, many of them read in my favorite spot on my parents’ front porch. I think I may have to hunt up some more of Martin’s novels. This one is right on the border between medium- and hardboiled and is well worth reading. If you’re a fan of private detective novels, you really should check it out. (Great cover on the reprint edition by Rudy Nappi, too, although it originally appeared on a different book, REEFER GIRL by Jane Manning—which also sounds pretty darned good!)

I'm always up for a good PI novel. I'll have to check it out.

This story had a third, British incarnation in 1957 as number 384 of the Sexton Blake Library. The title became VICTIM UNKNOWN, the settings English, the author byline Desmond Reid, and the PI character Sexton Blake. Somebody in publishing authority at the Amalgamated Press, London, had rightly noted that a 1956 revamp to update the long-running Sexton Blake series had shifted its tone to a closer match with popular American books of the time, like Gold Medal originals. The reprint rights to a couple of Gold Medals were bought, but in the event the amount of rewrite work to make them fit the Blake saga was not found cost-effective. Use of the Desmond Reid house name was subsequently limited to use on original work by British writers requiring lesser editorial adjustments or author anonymity.

Thanks for that. I never would have guessed there was a Sexton Blake version of this book!