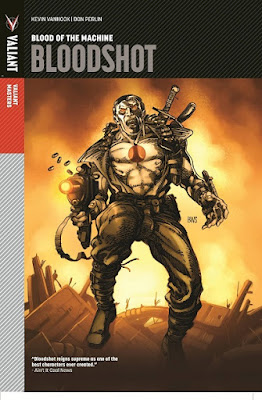 I was still reading comics when a new publisher called Valiant debuted in the early Nineties, but mostly I picked up Marvel and some DC. The creators at Valiant were a mixture of newcomers and old pros from the Big Two. I was aware of the comics they were publishing but never read any of them. Only so much time and money in the world.

I’ve heard good things about some of Valiant’s series, though, so I decided to give one of them a try. I found a used copy of a collection called BLOODSHOT: BLOOD OF THE MACHINE, published in 2012 and reprinting the first eight issues of BLOODSHOT from 1993. All the stories are written by Kevin VanHook and penciled by Don Perlin, an artist I remember from his work for Marvel.

The storyline is a little muddled in places, but the title character, Bloodshot, is a former Mafia assassin believed to be dead, but he was really modified by some top-secret government agency, including having healing nanites in his blood, to be a stronger, faster, deadlier killing machine. He’s also had his memory wiped clean, but in the course of things it starts to come back to him, leading to several confrontations with enemies from his past. Eventually he starts working for some British superspy group and tackles missions all over the world. There are also crossovers with other characters from the Valiant universe, none of which I was familiar with, either.

This is an okay collection. The character and the storylines are just a mixture of a number of elements comics fans have seen over and over, but everything is pretty well-executed. Bloodshot, despite his shady past, is a fairly likable protagonist. Don Perlin’s artwork is top-notch all the way. I enjoyed this book, but honestly, I doubt if I’ll seek out any more Bloodshot collections. Too much of it was just too stereotypical.

I have another Valiant collection featuring the character X-O MANOWAR. I plan to read it soon and see what I think of it.
Posted by James Reasoner at 5:00 AM

pretty picture and realistic. Get beta readers for your book using www.usbookreviews.com Beta readers help with editing, plot arcs and lend fresh eyes to the book.