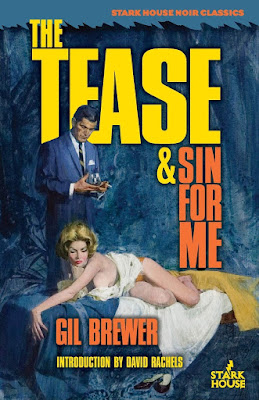 SIN FOR ME is one of Gil Brewer’s later novels, published by Banner Books in 1967, the second novel of his published by Banner that year. The first was THE TEASE. Both books have been reprinted recently by Stark House in a very nice double volume with the usual fine introduction by David Rachels that puts the books in the larger context of Brewer’s triumphant yet tragic career. In my frequently bass-ackwards fashion, I read SIN FOR ME first.

The narrator is Jesse Sunderland, a real estate agent in Denver who is almost broke and drinking too much, because he’s still despondent over the break-up of his marriage to the beautiful Germaine, who comes from a rough family up in the Rockies. Germaine took Sunderland to the cleaners in the divorce and then quickly remarried.

Then a good-looking blonde with a secret about Germaine and her new husband shows up and enlists Sunderland’s help in a scheme that will both make him rich and gain him a measure of revenge on his ex-wife. Chances are that like me, you’ve read enough of these books to know that that’s not going to end well for Sunderland.

Sure enough, murder crops up, Sunderland is slated to take the fall for it, and he has to go on the run to clear his name and maybe, just maybe, get his hands on that fortune . . . 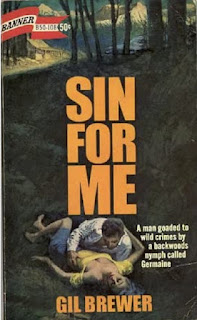 SIN FOR ME is a noir novel in the classic man-on-the-run style, with plenty of lust and greed and raw emotion propelling the story along at a breakneck pace, and few authors were ever better at that than Gil Brewer. At his peak, he may have been the best ever, although Harry Whittington and Day Keene belong in that discussion, too. By 1967, Brewer wasn’t at his peak anymore, but he was still capable of spinning a fine yarn, which SIN FOR ME certainly is. I raced through this book and thoroughly enjoyed it. I’m glad Stark House has reprinted it and THE TEASE, because I don’t think I’ve ever come across a copy of the original edition of either book. This double volume is well worth picking up.