Forgotten Books: The People of the Mist - H. Rider Haggard 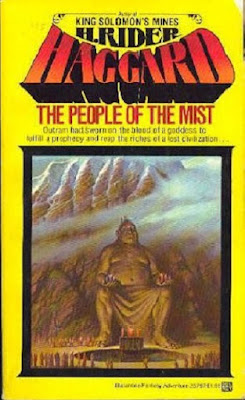 I’ve heard and read so many good things about H. Rider Haggard’s work over the years that I’ve been interested in reading more of it for a long time. More than 50 years ago, I read perhaps his most famous novel KING SOLOMON’S MINES, and although I remember enjoying it, that’s about all I recall.

Recently, having seen comments about the 1894 novel THE PEOPLE OF THE MIST being a great Lost Race yarn by Haggard, I decided to give it a try. It opens in England, with Leonard Outram and his older brother Tom losing the family estate because their father, in financial embarrassment, has committed suicide. Leonard and Tom vow to become rich enough to reclaim their birthright, and so off they go to Africa to hunt for gold. Unfortunately, Tom dies of a fever, and Leonard is left to carry on with the quest, aided only by his faithful servant, the native dwarf known as Otter.

In a chance encounter, they learn about a beautiful English girl, Juanna Rodd, who’s being held captive by slavers, and the girl’s servant, who is from a city hidden by a mysterious mist, promises Leonard that if he’ll help rescue Juanna from the slavers, she’ll lead them back to that lost city where there’s a fortune in rubies and sapphires waiting for the man bold enough to take them. 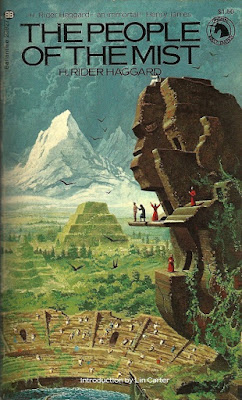 From there, of course, we gallop off on a grand adventure featuring evil slavers, evil high priests, human sacrifices, hidden passages, a giant idol, and a monstrous crocodile worshipped as the living embodiment of a god. THE PEOPLE OF THE MIST is full of stuff we’ve seen countless times in pulp stories and Tarzan movies. The thing to remember, though, is that Haggard was there first for a lot of it.

I love stories like this, no matter how many variations of them I read, and THE PEOPLE OF THE MIST is full of wonderful scenes that really linger in the imagination. Some of the images Haggard conjures up are really epic. Otter is an absolutely great character, too, and even though he’s supposedly Leonard’s sidekick, he’s the one who actually saves the day over and over. Everything builds up to a conclusion that is both satisfying and a little surprising. Haggard doesn’t let things play out exactly how you might expect.

Now, as you might expect with a book first published in 1894, the style is, at times, a little dry and old-fashioned, although the action scenes clip along nicely. THE PEOPLE OF THE MIST is considerably longer than the books I normally read, too, and it took me a while to get through it. But there are some great scenes and I wound up thoroughly enjoying it. It may be a while before I get around to reading another novel by H. Rider Haggard . . . but not 50 years this time, I’m thinking.

God, it must be nearly 50 years since I have read this (that second cover shot was the paperback I had, I think). Haggard was creative and, as you say, the first at a lot of “lost civilization” stuff but remember how I compared him to Burroughs and he did not come out the better.

Well, I still enjoy Haggard, having just read several novels of the Quatermain saga for the first time, and there are still a bunch to go. Yes, he is definitely old school and a little racist too, but that was the flavor of those times and I can get past it. He was a hell of a story teller.

Burroughs? Haven't read any of that stuff in 50 plus years now and have no desire to.

James, ALLAN QUATERMAIN and SHE still hold up, and I'm also fond of the later team-up, SHE AND ALLAN. THE WANDERER'S NECKLACE, RED EVE, ERIC BRIGHTEYES, THE ANCIENT ALLAN, and MORNING STAR either skirt the edge of Heroic Fantasy or cross over, depending on one's definition. The movies have never done right by Haggard, not even the 1930s British version of KING SOLOMON'S MINES, despite Cedric Hardwicke's pitch-perfect performance as Quatermain.

Easily one of Haggard's best stand-alone novels. Robert E. Howard owned it and, I believe, borrowed a few things for his own stories. As Fred points out, HRH wrote far, far more than just "lost race" novels. His THE WORLD'S DESIRE is definitely within the heroic fantasy genre. IMO, Howard probably borrowed from the first chapter to use in THE HOUR OF THE DRAGON and he almost assuredly borrowed the chief menace in the novel for his own "The God in the Bowl".

What other author can claim to have been admired by Howard AND Tolkien, Clark Ashton Smith AND CS Lewis? Haggard was the fountainhead.

Seeing these recommendations definitely makes me want to read more by Haggard, sooner rather than later.

I hate to say it, but despite the love I've felt for Burroughs' work, lo, these many years, the last time I read one of his books that I hadn't read before, it didn't hold up quite as well as I'd hoped it would. But there are still more I need to read, and I intend to get to them!

I devoured Burroughs as a child. Skipped lunch frequently to have 50 cents to go to the corner store and get one off the spin rack. Yeah, maybe doesn’t hold up as well 50 years later but still fast moving and fun.

"the last time I read one of his books that I hadn't read before, it didn't hold up quite as well as I'd hoped it would."

Well, there were certainly some novels--especially those written after 1920 or so--where ERB's enthusiasm was lagging a bit. I would still put TARZAN OF THE APES/THE RETURN OF TARZAN and GODS OF MARS up against just about any competition. Surprisingly enough, I reread THE LAD AND THE LION after about 35-40yrs and found the "back home" chapters to be quite interesting--much moreso than when I was a kid. ERB really had a good insight on how most modern revolutions are engineered and tells the tale in an exciting way. His "Moon Trilogy" also has surprising depths.

I'm continually surprised by people who say you have to "turn off your brain" to read ERB. Bradbury and Sagan certainly wouldn't agree. Burroughs put social commentary/satire in virtually ALL of his novels. He simply didn't beat the reader over the head with it. He believed telling an entertaining tale was paramount. That's not how it's done nowadays.

Thanks, Deuce, I was feeling a bit defensive. Rereading the Carson series for the first time in 40-50 years and I am struck by the humor, some of it political. Not the best Burroughs by any means but fun. The Caspar series holds up anytime as do many of the Tarzans.

Nice review. There is some really great stuff in that one...some great crocodiles, trap doors, and a harrowing and electric sequence toward the end. I like ERB, but generally prefer the adventure fiction of H. Rider Haggard and Harold Lamb.

A good review (without revealing too much) of one of Haggard's most enjoyable adventures. Thanks for the post; not enough people read Haggard or even know he existed. As you note, he was there first for a great many of the ideas we associate with SF & F today.

Haggard (like ERB) is considered racist by many today, yet you'll find that the native characters are often the most heroic. Otter is a great example but there are others throughout HRH's African tales.

I reread this recently. A fine work