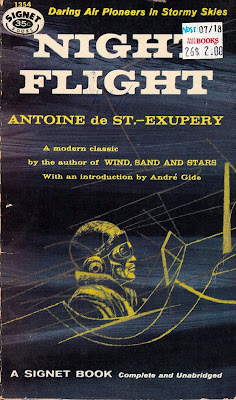 I’ve read a lot of aviation fiction over the years, even though I don’t fly, but most of it has been from the pulps. NIGHT FLIGHT by Antoine de Saint-Exupery is definitely not pulpish, but in a way, it is.

I thought I had read this short novel 50-some-odd years ago when I was in college, but I had no memory of it now. It’s a very simple story, set mostly on one night in Buenos Aires and in the air above the Andes, as three mail planes try to get through on their routes as a storm moves in and the people on the ground back in Buenos Aires try to help the pilots as much as they can.

Antoine de Saint-Exupery was a French aristocrat who gained fame as an aviator during the early days of air travel and the mail service. Later, he attained a high literary reputation for his poetry, memoirs, novels, and the children’s book THE LITTLE PRINCE. During World War II, he flew for the Free French Air Force as a reconnaissance pilot and disappeared while flying on a mission in 1944, presumed lost at sea somewhere in the Mediterranean.

With that background, it’s not surprising that NIGHT FLIGHT is written in a lyrical, highly descriptive style, and I’m sure that accounts for its literary reputation. At the same time, the whole “man against nature” theme is something that would have been quite at home in a pulp like ADVENTURE, and there are bits of fine, terse, hardboiled writing throughout the book. That’s why I say NIGHT FLIGHT can almost be considered pulpish. Its subject matter certainly is.

I enjoyed this book, and I’m thinking now that maybe it was WIND, SAND AND STARS, Saint-Exupery’s other famous aviation book, that I read in college. Maybe I’ll read it and see. In the meantime, while I wouldn’t want a steady diet of literary novels like this, it made a very nice change of pace and I enjoyed it. It’s still in print, and the copy in the scan above is the one I read (complete with Half Price Books sticker showing the two bucks I paid for it), published by Signet in 1956.

And I feel like I should point out that this may well be the only blog on the Internet where you can read reviews of novels by both Antoine de Saint-Exupery and Ed Earl Repp.

The composer Samuel Barber wrote a second symphony that he later witbdrew, except for the 2nd movement, which he entitled "Night Flight"--inspired by this booj.

"And I feel like I should point out that this may well be the only blog on the Internet where you can read reviews of novels by both Antoine de Saint-Exupery and Ed Earl Repp."

MGM made an all star adaptation in 1933; Gable, the Barrymore brothers, Myrna Loy, Robert Montgomery, and Helen Hayes. It's directed by Clarence Brown, but is a rather lackluster film in spite of a lot a fancy optical wipes, and and aerial footage. It was the third in their all star productions after Grand Hotel and Dinner at Eight.

I read Wind, Sand and Stars last year as part of my program of finally getting around to books I've meant to read for most of my life.
It was beautiful, full of lush passages full of the romance of flying and describing the cruel beauty of the African desert. And it was moving. At one point, having crashed in a landscape so inhospitable it was almost lunar, the author and his co-pilot set out on foot knowing that they are all but certain to die.

It was short, but with a mighty power-to-weight ratio. I'll read it again.

I’ve read this two or three times, and Wind Sand and Stars a dozen times at least. I love them both, and consider them must reads for everyone.

I didn't take much convincing. I have a copy of WIND, SAND AND STARS on its way to me.