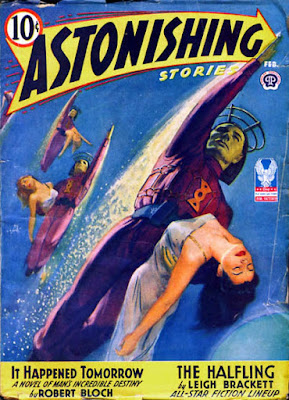 Pretty good cover by Milton Luros on this issue of ASTONISHING STORIES, Popular Publications' science fiction pulp. And you certainly can't argue with the quality of the authors inside: Leigh Brackett, Henry Kuttner, Robert Bloch, and James MacCreigh, who was really Frederik Pohl. There's also a story by Walter Kubilius, a name that's familiar to me but I don't really know why. I do know this looks like a fine issue, though.
Posted by James Reasoner at 6:00 AM

Kubilius was an early SF fan who eventually published about 30 stories, most of which were science fiction and fantasy, with a smattering of detective stories and one western story -- none of the very memorable. He was one of the organizers of the first science fiction Worldcon and was a founding member of the Futurians. ASTONISHING was a low-budget magazine edited first by Frederik Pohl, then by Alden Norton. Most of the issues Pohl edited were packed with stories bought cheaply from fellow Futurians and I suspect that Kubilius' story was in inventory when Norton took over. Kubilius quit the genre in 1952 to edit nonfiction magazines. He died in 1993 at age 74. He published no books.

Thanks, Jerry. My vague memory was that Kubilius had something to do with SF fandom, and I see that was right.

It always makes me happy when I can get a hold of a pdf of a Pulp magazine that you talk about. Bonus if the authors are awesome. I've loved everything by Brackett and Kuttner that I've read.

They're certainly two of my favorite SF authors, as well.

Kuttner and Brackett are two of my favorites as well. I also really like Bloch and Pohl.

And Pohl, having quit ASTONISHING and SUPER SCIENCE over a raise he didn't get (which request was met, apparently, with complaints from boss Norton), briefly freelanced and then came back and was assistant editor of the magazines. When drafted, Pohl apparently got fellow-Futurian Damon Knight the job at Popular FP was vacating.

When SUPER SCIENCE was briefly revived at the turn of the '50s at Popular, Ejler Jakpbsson was the editor. Pohl was mildly amused when Jakobsson, on staff at UPD Publications when they bought the GALAXY Group magazines IN 1969, was tapped to follow Pohl at GALAXY, IF and WORLDS OF TOMORROW as well (and to follow "Lester Del Rey" at the sibling WORLDS OF FANTASY). Judy-Lynn Benjamin stayed on for a while as assistant editor, before marrying Del Rey and going on to Ballantine and their own imprint.

Algis Burdys noted that, in trying as an adolescent to gain approval from his Lithuanian diplo parents for his interest in sf, he noted that this Lithuanian_American Kubilius wrote for sf magazines. Kubilius probably being Communist Party-friendly at least, and Budrys's father not at all, apparently forbade young AB from ever reading sf again. Didn't work.