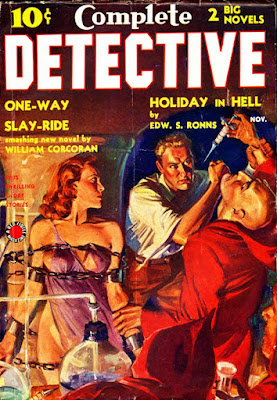 It's still Sunday, right? So, very belatedly, here's another pulp cover. This painting must have been intended for a Weird Menace pulp, because it checks most of the boxes. We've got a scantily clad babe in bondage, a red-robed cultist (with a hypodermic needle, no less!), a stalwart, two-fisted hero, and some vaguely scientific-looking equipment. I don't know who the artist is, but he sure gave us a lurid cover. Inside, the lead novel is by Edward S. Ronns, who of course was actually Edward S. Aarons, author of many top-notch paperback original novels, including the long-running Sam Durell espionage series. Of the other two authors in this issue, one name (William Corcoran) is vaguely familiar to me, while the other (Omar Gwinn) is completely unknown. I'd have bought this issue anyway if I'd come across it on the newsstand. With that cover, how could I have resisted?
Posted by James Reasoner at 9:56 PM

William B. Corcoran (1901-1969) (His pseudonym was Talbot Short) From Fiction Mags
William Corcoran - Editor, Author
This is an article in the series The Men Who Made The Argosy in The Argosy magazine from February 7, 1931. William Corcoran was the editor of Adventure magazine for a time. One of his novels is slated for republication this year by Murania Press (2015).
This is an article from Pulp Flakes dated 2015.
His novel, "Blow, Desert Winds" was serialized in Cosmopolitan, in 1934, with art by Harold Von Schmidt.

Anybody know if the Ronns/Aarons tale Holiday in Hell was ever re-printed?

I'd love to read a weird-menace tinged detective yarn from that author.

Thanks for the information on William Corcoran. I knew the name was familiar.

John, I don't think any of Aarons' pulp work has ever been reprinted. I know I've never read any of it. I'd love to read this one, too.

I assume there was a little-remembered companion title, INCOMPLETE DETECTIVE, in which the crimes were never solved?