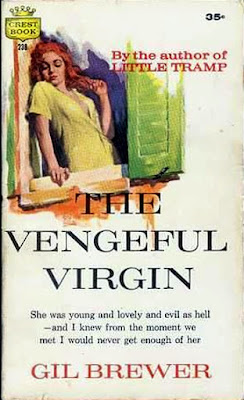 (This post originally appeared in somewhat different form on July 8, 2007.)

Originally published by Crest Books in 1958 and reprinted by Hard Case Crime in 2007, THE VENGEFUL VIRGIN is probably my favorite of the Gil Brewer novels I’ve read so far. The scenario is a familiar one: the narrator is a working man (in this case, the owner of a TV repair and electronics shop) hungry for a big payoff. He meets a beautiful young woman who’s stuck taking care of her wealthy, invalid stepfather. It’s what Brewer does with this set-up that makes this such a fine novel. Some authors would take half the book to develop a slow, psychological build-up, and that’s certainly a valid approach. Brewer, on the other hand, has his characters screwing like minks on the kitchen floor and plotting to kill the old man almost before they—and the reader—know what’s happening.

They come up with a decent plan, too, but as always, events don’t play out exactly as they’re supposed to. The fast pace continues all the way through the book as more and more goes wrong and one murder leads to another. There are some striking scenes starkly illuminating the lust and greed that are the twin essences of noir fiction. Brewer’s prose is simple but powerful and carries the reader along. There’s probably not much here that will surprise a veteran reader of this sort of novel, but I had a thoroughly enjoyable time watching Brewer work at his craft. 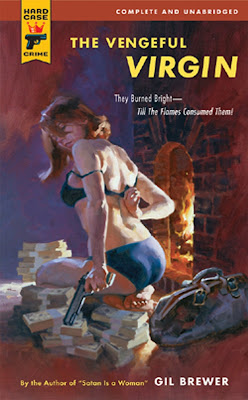 And aren’t those great covers? The Hard Case Crime edition is still readily and inexpensively available, and it’s well worth seeking out. THE VENGEFUL VIRGIN is a top-notch noir novel and gets a strong recommendation from me. (By the way, I worked in a TV repair shop for five years, and nothing even remotely like this ever happened to me.)

One of my favorites of Gil Brewer. Love that it is part of an exclusive collection offered by Hard Case Crime!

Always good to see Brewer's name mentioned and remembered. I've read a few comments that suggest THE VENGEFUL VIRGIN is a slight entry in Brewer's body of work and I guess I can understand that, but even so it's one that I've always felt was awfully entertaining. On a related note, I have the large 16"x20" (?) Suntup print of the HCC cover framed and hanging on my office wall: https://twitter.com/ron_clinton/status/1113869930573651969?s=20