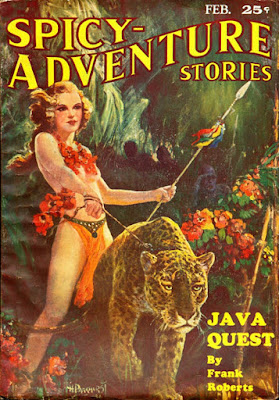 Yeah, I'd read a pulp with a cover like that. Excellent work by H.L. Parkhurst on this issue of SPICY-ADVENTURE STORIES. I think reading it would be quite enjoyable, too, considering there are four stories by Robert Leslie Bellem (one under his own name and one each as by Frank Roberts, Jerome Severs Perry, and Ellery Watson Calder), two by E. Hoffmann Price (one under his name and one as by Hamlin Daly), Norman A. Daniels (writing as Kirk Rand), and C.C. Spruce and Atwater Culpepper, who seem to have been real guys and not house-names or pseudonyms. But don't quote me on that, because I don't really know.
Posted by James Reasoner at 4:30 AM

You forgot about '21." Every free throw was 2 points and then the layup was 1. You kept going until you missed a shot, kept your score, and turned the ball over to your opponent who then racked up his score. We played baseball on a circle too. A large trailer was parked at the end so the broad side faced toward the open road. That was the left field wall. Sort of the Green Monster since we lived near Boston. We used a baseball bat and tennis ball. Any line drive over the pitcher's waist was a single. Hit the trailer and you had a double. Over the trailer was a home rune. All runners were "invisible." Each batter got three strikes. You could play 2 on 2 with the player not batting serving as the catcher. along the left field foul line (actually a curb cut) you had to be careful not to hit the ball into Mrs Ciocca's flower garden because she would complaint to our parents. All in all a slice of Americana circa 1969 for those of us who thought sports were more important than whatever else was going on in the world.