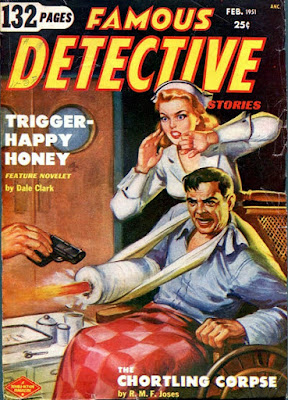 Man, do I love that cover! Not only do we have a sexy redheaded nurse, we've got a gun hidden in a cast (a dang cannon, from the looks of that muzzle blast), and stories with titles like "Trigger-Happy Honey" and "The Chortling Corpse". As the old saying goes, this stuff is right up my alley! Inside are stories by old pros T.W. Ford, Dale Clark, and Richard Brister, prolific house-names Mat Rand and Cliff Campbell, and a story by none other than science fiction great Cyril Kornbluth. I would have bought this one for the cover, but I'll bet I would have enjoyed the stories, too.
Posted by James Reasoner at 4:30 AM

You're right. What a great cover!

Dale Clark is the pseudonym of Ronal Kayser. He wrote under both names.

Do you know the name of the cover artist? It is pretty great artwork.

Until I looked it up just now, I didn't know this was a variant title of CRACK DETECTIVE, which among other work by Robert Lowndes's fellow Futurians (such as Kornbluth) also published Judith Merril's first pro story. Walter Kubilius in this issue was another Futurian, or ex-Futurian by the 1950s...

I can't spot a signature in the scan from the FMI, either, and I'm not well-versed enough to identify this artist by style.