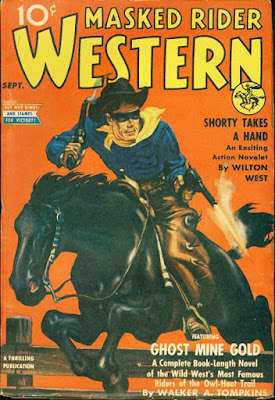 This is the pulp in which "Ghost Mine Gold", the Masked Rider novel featured in yesterday's Forgotten Books post, first appeared. It has a decent cover, and that's actually pretty close to how I visualize the Masked Rider when I read the books. Other authors featured in this issue are Tom Curry (who wrote a few Masked Riders himself), the prolific and well-regarded Stephen Payne, Wilton West (an author I know nothing about), and the house-name Jackson Cole.
Posted by James Reasoner at 4:00 AM

Who was that masked man?

Thrilling/Pines changed the look of the Masked Rider when they took over the character from the failed Ranger Publications. In the first 13 stories he wore all black clothing and accessories with a full face mask and cloak. That little circle doohickey on the cover this issue was the original look. It stayed on most/all covers until about 1950. In the early '50's they experimented with more of a costume on the cover of three issues. This included adding back the cloak, black with red lining. "Deadline For Sheep" was the title of the first of those issues. I found that issue in an Albuquerque used bookstore in about 1962. That young comics fan snapped it up. If it had just had the smaller than Green Arrow's mask of the time, I doubt I'd have bought it.