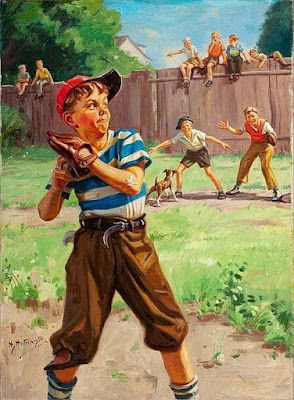 The street where I grew up is a circle. There were fifteen houses on it in those days (the two down at the corner with the service road were moved out during an expansion of the highway some years ago). All the houses are on the right as you follow the road up and around and back to rejoin with itself. My parents’ house was the seventh one. It sits just before the point where the road starts to curve around to the left to form the circle. The area in the center of the circle, maybe two acres, was a communal space and everybody who lived on the street had the right to use it. Sometimes we called it the park, but mostly we just called it the circle. And it was the scene of some epic sporting contests.

The fellow who lived next door to us sunk some heavy posts in the ground and put up fencing between them to serve as a baseball backstop. It was good for those of us who loved to play ball all spring and summer, and it also protected his cars, which he sometimes parked along that side of the street, from foul tips. A backstop also eliminated the need for a catcher, which was good because we sometimes had trouble coming up with enough kids to field two teams. Any ball the batter swung at and missed or let go by because it was ’way off the mark, he’d just pick it up himself after it hit the backstop and throw it back to the pitcher. First base was a tree, second base was a telephone pole on the other side of the circle, and third base was another tree. A ball hit on the fly across the street and into the front yards of the Guthrie house (later the Sanchez house), the Whatley house, the Woodard house, or the Brooks house was a home run. That happened very, very seldom. We were not a neighborhood of power hitters.

When there weren’t enough kids to play baseball, we’d play Flies and Skinners instead. One guy would hit fungo while the rest of us ranged out in the circle. Catch one fly ball or cleanly field three grounders (“skinners”), and you got to go up and hit. It was a simpler time, and we could spend hours doing that.

At some point, another neighbor put up a basketball goal on the other side of the circle, and it wasn’t long before we had a fairly flat area trampled down in front of it. We usually played two-on-two, occasionally three-on-three, and since we had only one goal, we had to play half-court style, taking the ball to the back part of the trampled-down area any time you got a rebound and then starting from there. Fouls were not completely unheard of, but they were rare. We’d usually play first team to fifty points won. Usually, the final score would be 50-48. We weren’t defensive wizards, either.

When there were only two or three of us, we played Horse or Around-the-World or just shot around. The goal and hoop in the circle were regulation, but there was also a backboard made out of planks nailed to a tree in my backyard, with a hoop attached to it. No net. It was lower than regulation, somewhere between eight and nine feet off the ground. I could dunk in that hoop when I was in high school and college, the only times I’ve ever experienced that particular sensation.

My senior year in high school, I was able to skip last period and get out an hour earlier than any other kid who lived around the circle, so a lot of days I’d get my basketball and go shoot free throws. I got to where I could hit a hundred in a row sometimes. I remember those times quite fondly.

There was also a good open space in the circle stretching from the road in front of my parents’ house to the road in front of the Whatley house that served as our football field. Out of bounds on one side lined up with the post the basketball goal was on, and on the other side the tree that served as first base in the baseball games marked out of bounds. The road at each end was the end zone, of course. We played two-below, all pass, no rushing the passer, three completes is a first down. No goal posts, so no extra points or field goals, only touchdowns. We usually played first team to 48 wins, and unlike basketball, there were some lopsided scores in those games. Usually it was pretty close, though. I played quarterback most of the time and sometimes threw so many passes my right elbow ached until I went to bed that night.

I was playing receiver, though, the evening I planted my foot wrong, rolled my ankle, and broke a bone in my foot. I broke a different bone in the same foot playing football with some of my friends in college, and the ring finger on my right hand is crooked to this day because I was trying to tag Bill Weidman while playing defense in a game in my parents’ back yard and that finger got caught in one of the belt loops on his jeans and twisted so that it broke at the first knuckle. It swelled up pretty bad but I didn’t realize it was broken until a few weeks later when I went to the doctor and had it x-rayed. The bone had already started to heal, and they would have had to do surgery and rebreak it to straighten it up. No thanks. It doesn’t stop me from typing, now does it?

All these stories are probably making those of you who have only known me as an adult think that I’ve never really seemed like the athletic type. And that’s true. I’ve always been overweight, and my feet stick out funny. But I understood the mechanics and the strategies of the various games, and when I was young I had good hand-eye coordination and, while I was never fast by any stretch of the imagination, from time to time I could manage to be sneaky-quick. Also, opponents often underestimated me. When I’d play pick-up basketball games in college, none of the other team would bother guarding me, so I could stand out on the perimeter and pop long range shots all day. One of my friends who’d been an all-city guard during high school realized this and would feed me the ball, so I knocked down eight or ten shots a game . . . and the other team still wouldn’t cover me. Hey, you take what they give you.

Don’t regard any of this as bragging. I could manage “not terrible” at times, but I was really not a good athlete and have never been part of an actual, organized team except for a couple of summers during college when I played on our church’s softball team. But I enjoyed playing. Sports was never the focus of my life that reading and later writing have been, but it was always good to be outside moving around and sharing those good times with my friends.

As I' sure Bill Crider would say if he were here: galloping nostalgia! Great stories. You wouldn't think there would be that much in common with the Big City, but you'd be surprised. When we moved to Brooklyn I was 9. We played punch ball (using a pink Spalding) in the alley between our house and the Greenbergs' house next door. If the ball went on the flat roof of their house it was lost, so we'd try and be careful of that. Our back door was first base, theirs was third base. You also had to be careful throwing it towards home plate, because it often - too often - went out into Ocean Avenue (two lanes of fast moving cars in each direction), where a car could hit it and you'd be chasing it down the street.

We were two short blocks from the elementary school, which had one HUGE schoolyard, one smaller one, and one little one for kindergarten kids. My brother and I usually used the middle sidex yard to play stickball, as the wall had a chalked rectangle that made it easy to call balls and strikes. If you had enough kids you could play real games in the big yard, which also had basketball hoops.

Thanks, Jeff. For the most part, kids are kids wherever they are, I think, and that's what makes this stuff fun to read and write. Our roof wasn't flat, but I managed to get balls stuck up there anyway, and then my dad would have to get the ladder out and climb up to get them. Kids can always find something to be the bases in a ball game. We didn't have to worry much about traffic because our street didn't have any outlet, and any time a car came along we could see it and pause in our games until it went by. Later, when frisbees became popular, we would throw them back and forth in the long straight stretch of the street before it formed the circle. Those were good times, too.

Thanks, James. Reminds me of a lot of my youth. I was always building treehouses and exploring, too. We always lived near government or oil land that wasn't patrolled and was often filled with poison ivy. Thankfully I wasn't too susceptible to it.