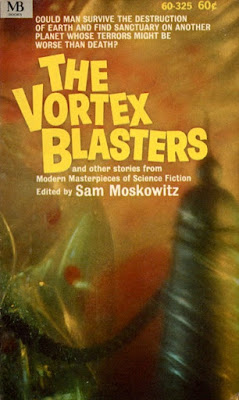 This book has some special meaning for me because I remember that my brother-in-law (who introduced me to science fiction) had a copy of it when he and my sister lived down the street from us in the early Seventies. I borrowed it from him and read the title story, but I don’t think I ever got around to the others. The stories in THE VORTEX BLASTERS were pulled from another anthology edited by Sam Moskowitz, MODERN MASTERPIECES OF SCIENCE FICTION, published by World Publishing Company in 1965. “Masterpieces” might be going a little too far, but there are some good stories in here. 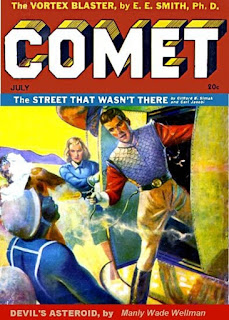 “The Vortex Blasters” (originally published in COMET, July 1941 under the title “The Vortex Blaster”) was my introduction to the work of Edward E. “Doc” Smith, PhD. (Gotta add the PhD after his name.) It’s set in the same universe as his magnum opus, the Lensman series, and is sometimes counted as part of that series although the only Lensman in the story is a supporting character. The protagonist is an atomic scientist named Neal “Storm” Cloud. Earth has atomic power, but it’s not very stable and will sometimes generate out-of-control vortices, which are basically atomic tornadoes. One of those vortices kills Cloud’s wife and children, and in his obsession for vengeance he comes up with a way to destroy these violent forces of nature.

I enjoy Doc Smith’s work, but I’m not a huge fan. His prose is pretty stiff and his dialogue usually sounds like nothing that ever came out of a human mouth. But his ideas are always big and interesting and the stories move along well. His stodgy heroes kind of grow on me, too. I enjoyed “The Vortex Blasters” when I read it 40-some-odd years ago, and I enjoyed it when I reread it now, too. That same long-ago summer, my brother-in-law and I both read Smith’s Skylark of Space series. That was enough Doc Smith to last me for a good long while. He had a huge influence on science fiction for decades, though. 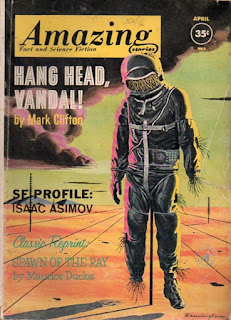 Edmond Hamilton’s “Requiem”, from the April 1962 issue of AMAZING STORIES, is a far-future tale about an expedition sent to explore a planet about to be consumed by an expanding star and then observe its extinction. That planet, of course, is Earth, the birthplace of the by now far-flung galactic empire. I loved Hamilton’s pulp space opera stories, but late in his career he was writing thoughtful, poignant stories like this that are even better. I liked this one a lot. 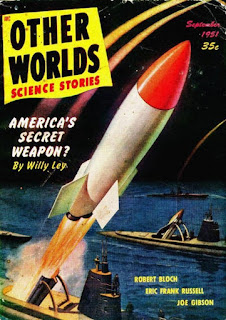 Eric Frank Russell is almost totally forgotten these days (although I’ll bet many of you reading this remember his work), but I’ve enjoyed everything I’ve read by him. Good ideas and a nice undercurrent of humor running through all his stories. “The Witness” (OTHER WORLDS SCIENCE STORIES, September 1951) is a first contact story of sorts, with an alien visitor being put on trial for possibly being a spy for a race that wants to invade and conquer Earth. Russell has a lot of fun with the legal system. This is another good one. 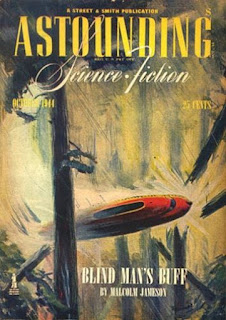 Lester del Rey’s “Kindness”, from the October 1944 issue of ASTOUNDING SCIENCE FICTION, is also a far-future story in which a new, super-smart mutation of humanity, homo intelligens, has replaced good old homo sapiens . . . except for one guy. His fate has a bittersweet taste to it that echoes Hamilton’s “Requiem”. I’ve never been a big fan of del Rey’s work and this story is maybe a little too predictable, but it still has some nice touches to it. 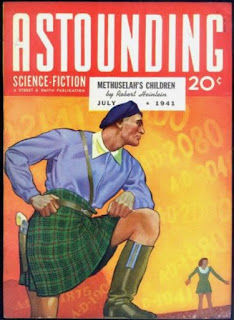 “—We Also Walk Dogs” (ASTOUNDING SCIENCE FICTION, July 1941, under the pseudonym Anson McDonald) is part of Robert A. Heinlein’s Future History series. It’s the story of a company that hires out to do any sort of legal job, no matter how seemingly impossible, and how they manage to set up a diplomatic conference for various alien races and in the process come up with an unexpected bonus. I’ve read a lot of Heinlein’s work over the years (he was my brother-in-law’s favorite SF author) but don’t recall ever reading this story before. The prose is as smooth as always and I love the premise, but I don’t think Heinlein did as much with it as he could have. Still a good story. 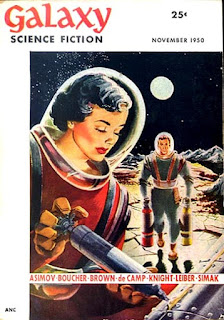 Fritz Leiber is another author I usually like, but his story “Coming Attraction”, originally published in the November 1950 issue of GALAXY SCIENCE FICTION, was kind of a miss for me. Set in New York City after it’s been semi-devastated by a limited nuclear war, it’s mainly about how women have started wearing masks over their faces as a fashion trend, inspired by anti-radiation garb after the war. I’m not sure why it didn’t work very well for me, but it didn’t. A little too much of a kitchen sink story, maybe, with lots of changes in society but no real point to any of them. Or maybe I’m just dense. 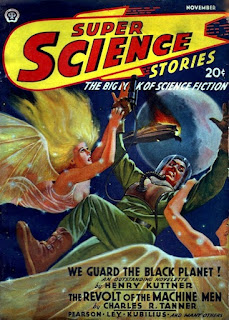 Then we come to the final story in this volume, Henry Kuttner’s “We Guard the Black Planet!” (SUPER SCIENCE STORIES, November 1942). Now this is the real deal! A hardboiled Norwegian spacer throws in with a couple of shady characters to track down the origin of the Valkyrie myth on Earth. Seems he’s got this golden armband with the directions to a legendary invisible planet engraved on it, and the inhabitants of that planet are supposed to be beautiful winged women who visited Earth in the far distant past and gave rise to the stories of Valkyries bearing fallen warriors off to Valhalla. This is by far my favorite story in this anthology. Kuttner’s prose is colorful, imaginative, and very fast-moving, and the story has some decent scientific background to boot. I really enjoyed it. My kind of SF.

So all in all, THE VORTEX BLASTERS is a pretty strong anthology, with a couple of excellent stories (“We Guard the Black Planet!” and “Requiem”), several very good ones, and only one that I didn’t care for—and it wasn’t terrible. I’m glad I finally got around to reading the whole thing after so many years.
Posted by James Reasoner at 6:00 AM

Sam Moskowitz produced some solid SF anthologies and THE VORTEX BLASTERS is a good example. I really liked the covers of the SF magazines these stories came from. Nice touch!

I have a copy of this book somewhere, but I've never actually read it. I've read a number of the stories in it, but in most cases years ago. If my memory isn't failing, I know I've read the Heinlein, Leiber, and Hamilton. Probably the del Rey and Russell as well. (Russell is a writer who deserves a resurgence.) Ironically, I've never read the Kuttner story even though that was why I bought the books. This was 20-something years ago, before Haffner Press or the internet came along. I haunted out of the way used bookstores looking for obscure anthologies that might have stories by Kuttner, Moore, Brackett, or Bradbury that weren't available at the time. On a successful visit, I would walk out of the store with a stack of two or three. I was in grad school, so I frequently didn't have time to read them due to class and research commitments. After a while the books piled up and some I never got to.

I really enjoyed your detailed review of this book, particularly in that you went back to the original magazine appearances and cited them. Let's face it; that paperback is one ugly book. Lousy cover, cheap paper, and the production values shout one overriding message: that this is a cheap and ugly book. But the stories are fine and the magazines are beautiful. I'd enjoy reading more anthology deconstructions of this sort. --Curt Phillips

Curt,
"Cheap and ugly" applies to just about everything Macfadden-Bartell published, although as you say, the contents were often quite good. It's fitting that M-B's inventory wound up with an even worse publisher, Manor Books.

Read this when it first came out. I would probably find most of the stories a bit creaky now. In fact I found E.E. Smith unreadable even when I tried him at the age of 12. May be the worst writer in any field to find success.

No surprise to me that the Kuttner story stood out. That guy delivered almost every time, in almost any genre.
Ever read A Million Years to Conquer? Appeared in Startling 11/1940 and was reprinted by Popular Library in the 60's as Creature From Beyond Infinity.
It slams so many imaginative ideas onto the page so quickly and with such wild enthusiasm that it makes you dizzy to read it.

I never read the Kuttner story from Vortex Blasters. I need to fix that.

John,
Yep, I've read THE CREATURE FROM BEYOND INFINITY and blogged about it a few years ago:
https://jamesreasoner.blogspot.com/2011/09/forgotten-books-creature-from-beyond.html

I have read all these stories in the magazines and agree your assessment of them. But for some reason I have never seen this pb.

Cheap paper is right. My paperback copy has deteriorated to the point of crumbling pages. I put in a plastic bag so it wouldn't infect other books. Now I have to dig it out and see if I can still read any of it.

I think the Leiber shook up the tendency toward naive characterization so common in the '40s...it helped sf grow up a bit. Much as "E for Effort" and "The Lovers" did, That it seems unsurprising now is an indication of how successful it was.