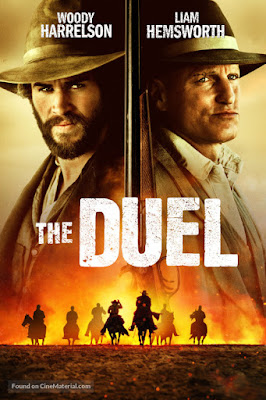 I’d never heard of this recent Western until Livia brought home a copy from Redbox, so that makes it overlooked as far as I’m concerned. However, in this series I generally try to write about movies I liked, but this one . . . I dunno.

Let’s start with what I didn’t like. The script plays, at least early on, as if the writer got up one morning and said to himself, “I think I’ll write a movie about how evil white people are. Especially white Christians.” This angle gets a little less heavy-handed as the movie goes on, but it’s blatant enough that it annoyed me. Liam Hemsworth looks great and turns in a decent performance as a Texas Ranger sent to investigate the deaths of a number of Mexicans along the Rio Grande, but he constantly does dumb things that a real Ranger probably wouldn’t have done, just to keep the plot moving. The big twist in that plot is one that’s been done to death. The geography is muddled, with towns either in the wrong place or characters going in the wrong direction to get from Point A to Point B, plus there’s a sense that everywhere in Texas is within a few days’ ride of everywhere else. The frontier town where the movie was filmed (which is actually in Mississippi) never looked authentic to me.

So for a lot of the time I actively disliked THE DUEL. But eventually there were a few things I liked about it. Woody Harrelson, as a shaven-headed, psychopathic preacher, chews the scenery relentlessly, and I’d rather watch an over-the-top performance than one that’s just phoned in. The action scenes are generally well done and staged so you can tell what’s going on, and the big gun battle at the end is excellent (other than Hemsworth’s character doing something dumb again). The streets of the town are a little muddy, but everything’s not constantly gray, gloomy, and raining, as it too often is in current Westerns.

All this leaves me with a very mixed reaction to THE DUEL. It’s too slow, pretentious, and politically correct. But every so often it breaks out in a scene that I really enjoyed. I’ve said many times that most of today’s filmmakers who try to make a Western really don’t know how to. Nobody, from the cast and crew to the writer, director, and producer have much (or any) experience at making Westerns and have never immersed themselves in the genre. But here I sit, pontificating, having never made a movie of any kind, offering up unsubstantiated opinions, and we all know what opinions are like. That’s the way I see it, though. You might like THE DUEL, you might hate it, or you might fall somewhere in between like me. But I wrote nearly 500 words about it, for whatever that’s worth.
Posted by James Reasoner at 5:30 AM

I was wondering about this but not enough to rent it. After reading your blog, I'm not going to. I did rent another Redox western the other day, GUNS & ANGELS, I think it was called, and couldn't get through the first five minutes. The photography and acting was awful.

Seems to me there are quite a few westerns being made these days even if they don't get into the theaters. I just watched FORSAKEN, which I'll write about eventually.

I'd like to see somebody cast Woody Harrelson someday in a really good Western. Unfortunately, in my observation, the key to writing an easy script is to have people do stupid things.

What can you expect? The names are superimposed on the wrong actors.

I had wanted to like this movie but only lasted about 10 minutes. For a really good recent western, I recommend, The Salvation (2014). A typical revenge western from Denmark(!), but is well done with Jeffrey Dean Morgan playing a great villain.

I trust every word you wrote and I won't be renting this one either. Thanks for the review.