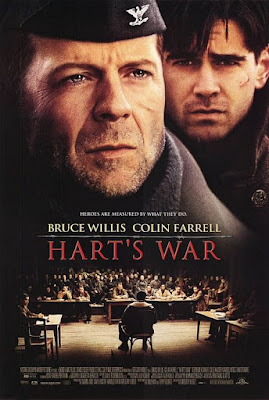 (This post originally appeared in somewhat different form on August 4, 2007. Maybe I'll have something new next week.)

This is another movie we missed when it came out, which is sort of surprising considering that I like Bruce Willis movies and World War II prisoner of war movies (such as STALAG 17 and THE BRIDGE ON THE RIVER KWAI, both great films). In this one Colin Farrell plays a lieutenant who is a senator’s son, a paper pusher who’s stationed well behind the front lines. But through some bad luck he gets captured by the Germans anyway and sent to a prison camp where Bruce Willis is the ranking American officer. As usual in this sort of film, not everything is what it appears to be at first, and the day-to-day drama of life in the camp eventually becomes something bigger and more important. One of the prisoners is murdered, apparently by another prisoner, which leads to a trial, with Farrell’s character, who was in law school when the war began, serving as defense counsel for the accused.

Since this film is based on a novel by John Katzenbach, a good thriller writer, it’s no surprise that the script takes some nice twists and turns. The acting is fine all around. Despite that, the movie never really engaged my interest as much as I thought it should have. I still enjoyed it, though, and consider it to be worth watching.
Posted by James Reasoner at 7:55 AM

I've had this DVD for about a decade, but have never gotten around to watching it, even though I love the premise. I have also been reading or re-reading Katzenbach's thrillers in order (I'm now on STATE OF MIND, which I had forgotten I read before). HART'S WAR will be next. Some of Katzenbach's books are terrific, particularly the two that were filmed as THE MEAN SEASON and JUST CAUSE. However, they're terribly wordy and would probably be a lot better at 300 pages or less.

There are a lot of novels that would be better at 300 pages or less.