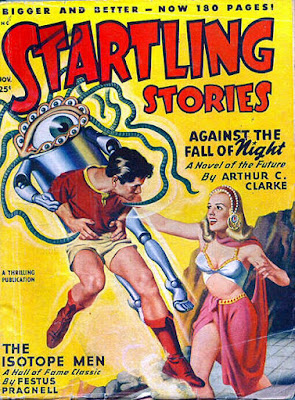 The cover on this issue of STARTLING STORIES is by Earle Bergey--but most of you already knew that, didn't you? I know his work was controversial at the time, but I really enjoy it. And inside this issue are stories by Arthur C. Clarke, Ray Bradbury, Jack Vance, John D. MacDonald, A.E. van Vogt, Frank Belknap Long, and Robert Moore Williams. Edited by my old editor and mentor, Sam Merwin Jr. I like having that link with pulp history.
Posted by James Reasoner at 6:00 AM

I love Bergey's work (and yes, I knew it was him). I also love the authors included here. Plus, it's cool you have a personal connection to this pulp.

Hooray for Startling, the only sf pulp I ever collected. Between the blazing covers, top line authors (plenty of frothingly imaginative Kuttner) and the presence of a complete 'novel' every issue, it's a highly satisfying magazine issue by issue or by the shelf.

I have pretty much collected most of the SF pulps. Astounding, Amazing, Planet Stories, Thrilling Wonder, Cosmic and on and on. Startling especially the post war years has excellent stories.

I love Bergey's art and it was a tragedy when he died suddenly at age 50 in his doctor's office. James is so right about the letters in STARTLING raving about the three B's: BEMS, BROADS, and BUMS. The readers kept whining to Merwin about stopping Bergey's risque(for the time) covers but he admitted more than once that he had no control over the art. The publisher decided the art policy.

If you love STARTLING, like I do, then you have to collect THRILLING WONDER during the 1939-1954 period. It was the same magazine as STARTLING. Same publisher, same editor, same writers, same artists. The only difference was that one title stressed longer stories.

It is still possible to collect STARTLING without breaking the bank. A couple years ago I sold a reader's set in good or so condition for only $500 for the 99 issues. At the pulp conventions I frequently see issues for sale at around the $10 mark or less.

Sure, there are more classic stories in ASTOUNDING, but I've always felt that STARTLING STORIES and THRILLING WONDER STORIES are more fun. I like PLANET STORIES, too, but think the other two were a little more consistent.

Walker, I'd pay $500 for a run of ASTOUNDING just for 1950-1975, but that wouldn't buy them. Sometimes it seems that Astounding is the one everyone loves to hate, and I wonder why.

I'm no expert on ASTOUNDING. I really enjoyed what I've read of it from the Thirties and Forties, and there's still plenty of good stuff in the Fifties, too. It's just a little stodgier than the others. And some people may hold Campbell's association with L. Ron Hubbard agains the magazine. But I'll read a Thirties or Forties issue of ASTOUNDING any day of the week and enjoy it.

Concerning ASTOUNDING, as Richard Robinson notes above, it seems that the magazine is often the one that many love to hate during the 1950's and 1960's. In my opinion it was still good during this period but not as good as GALAXY and F&SF. The reason being that Campbell scared off many of his excellent writers that he published during the golden age of 1938-1950. Not only because of Hubbard and his dianetics scheme but the Dean Drive and his habit of demanding that authors follow his favorite idea, etc.

Alfred Bester summed it up in a funny article about the time he met Campbell in the early 1950's. Bester was used to Madison Avenue expense account lunches and big private offices. Campbell was in a tiny cubicle with Kay Tarrant, his assistant and took Bester down to the cafeteria for a sandwich. The office was in a printing plant in NJ.

But then to top it off, Campbell started to act crazy and Bester never sold him another story. Many writers stayed away from Campbell in the 50's and 60's. Philip K. Dick sold to everyone but not much to Campbell. Same thing with Sturgeon, Simak, and Tenn and others.

Too many space chicks and not enough monsters for my taste. I guess I am really 11 years old...

Actually the space chicks often were there just to catch the eye of the newsstand browsers. The stories were actually quite well done in the late 1940's and early 1950's under Sam Merwin and even Sam Mines, his successor. This issue has a famous Arthur C. Clark story for instance and no silly girls distracting the hero.