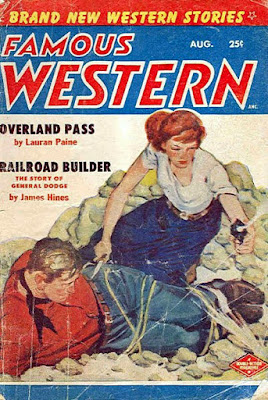 Another gun-totin' redhead on the cover of a Western pulp. Sure must have been a lot of them around in the old days. By 1955, the Columbia Western pulps were holding down the fort almost by themselves. I think only RANCH ROMANCES remained from any of the other publishers. FAMOUS WESTERN still had some decent authors writing new stories, though, in this case Lauran Paine, Lee Floren, and A.A. Baker. A far cry from the glory days of the pulps but probably still worth reading.
Posted by James Reasoner at 6:00 AM

I always had to chuckle at the author blurb in the back of Lauren Payne's novels; something along the lines of "he's wrtten 1000 novels, 800 of which have been published." I've never read the fellow but that always stayed with me. Talk about persistence!

I've never read any of Paine's work, either. One of my friends is a fan of his novels. I figure I'll get around to them one of these days . . . maybe.

In 1955 Thrilling was still putting out Texas Rangers every month and Triple Western on a quarterly basis along with Ranch Romances, and Stadium (or whatever Martin Goodman's outfit was calling itself than) still had its western line. Even Popular was keeping 15 Western Tales alive (though not for long) in a magazine format. I haven't read any Paine either but have a Famous from this year with something by him, though I bought it for Gordon D. Shireffs.

Lauran Paine was still going strong decades after even the Columbia pulps had disappeared. In the 1980s and '90s he was a mainstay of UK publisher Robert Hale's Black Horse Western list. Every other byline seemed to be another of his pen names. In October 1992, the month after Hale published the first Western I wrote for them, four of the ten new BHW titles were Paine's. He had literally dozens of aliases like Russ Thompson, Harry Beck, Nevada Carter, and Mark Carrel. Astonishing!

I should have remembered that TEXAS RANGERS and TRIPLE WESTERN were still being published, since I have quite a few issues from '55, '56, and '57. Both were very good pulps right to the end.

I like all the bright colors on these old magazines, they all seem muted today. I have read several of Paine's westerns, really like them