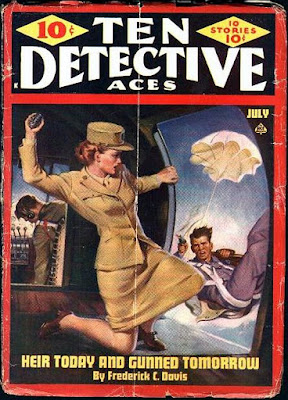 There's got to be an interesting story behind that cover. Despite having a groan-inducing pun as a title, the lead story by Frederick C. Davis is probably pretty good. Davis never disappoints. The rest of the line-up in this issue of TEN DETECTIVE ACES is pretty strong, too: William Campbell Gault, Robert Turner (under his own name and as Glenn Wood), Joe Archibald, Norman A. Daniels, and David X. Manners.
Posted by James Reasoner at 6:00 AM

Wow, I tend to think of Ten Detective Aces as a 30's magazine, where authors like Page, Teppermen & Davis cut their teeth writing hero pulp. I didn't know it ran so long into the 40's.
The editorial stance had to change over time, or course, but I'm kind of surprised to see it followed that Dime Detective style of strained humor in the titles (i.e. A Corpse Grows in Brooklyn, None But the Lethal Heart, etc).

Yeah, I think of it as a 30s pulp, too, but it ran until 1949, with many of the later issues having covers by Norman Saunders. The authors are a mixture of the decent (Norman Daniels. W.T. Ballard, Talmage Powell) and writers I've never heard of.

I hope someone can explain what's going on in the cover illi. Bad guy jumping after killing crew (except woman) and she's, what? Trying to throw the grenade at him? Instead of taking over the plane controls? Or?

Not a clue. I think it just looks good and doesn't make much sense.