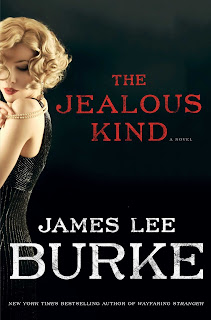 I’ve read only a handful of novels by James Lee Burke, but I enjoyed all of them very much, so I expected to enjoy his latest novel, THE JEALOUS KIND, as well. I wasn’t disappointed.

Set in a vividly described Houston in the early 1950s, this book is the story of what happens, good and bad, when high school junior Aaron Broussard sees and immediately falls in love with the beautiful, auburn-haired Valerie Epstein. This earns him the enmity of Valerie’s former boyfriend, who’s older, rich, cruel, and vengeful, so not surprisingly things get pretty bad for Aaron and his friend and ally, Saber Bledsoe. Some violent gang members with a grudge against Aaron figure into the mix as well. In a coming of age novel, the protagonist sort of has to survive to, well, come of age, and there’s some real question whether Aaron will make it through this particular rite of passage or not.

In some ways, THE JEALOUS KIND is a variation on the sort of juvenile delinquent novels that paperback publishers put out by the dozen during the Fifties. It’s longer, more complex, more graphic, and written in a more literary style than those tales by Hal Ellson and Wenzell Brown and other authors of that era, and I have no idea whether Burke ever read any of those books or not, but those are the sort of echoes that I found in this novel.

THE JEALOUS KIND is connected to some of Burke’s other novels (Aaron’s middle name is Holland, a family that figures prominently in other books) but works just fine as a stand-alone. Aaron and Saber are interesting characters, the villains are properly despicable, and Burke keeps things moving along at a compelling pace. And of course the writing is very vivid and colorful. This is an excellent book, and whether you’ve read Burke before or haven’t sampled his work yet, I give it a high recommendation.

I love The Neon Rain, which just happens to be the first one I read.

That's the first one I read, too. I've read the first four Dave Robicheaux books, his Civil War novel, and maybe one of the others, I don't recall. He's an author with a distinctive voice, which I like.

I notice that the "auburn-haired" Valerie is a blonde on the cover. I hate when that happens.

If you liked The Jealous Kind, may I just shout out " Wayfaring Stranger!" It is a beautiful book. I am a life long bookaholic, and of all of Mr. Burke's works, that one shines, bedazzles, grabs the heart, pulls you in, has you rooting, and leaves you thrilled with the entire adventure of it. I have read all of his books, some several times. They are lyrical without being flowery, descriptions of characters are outstanding. You feel as if you would know them if you met them on the street. Some passages leave you stunned at the beauty of how it is written.

Excellent author, but he does like to sermonize. His politics come shining through in many of the Dave Robicheaux books, and the books that place Dave and his detective partner Clete in Montana just don't work. Still, the books sets in South Louisiana work, and he nails the patois perfectly.