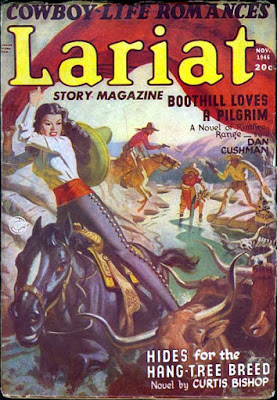 Almost every time I see a cover from LARIAT STORY, I think, "I want to write that story!" This one is no exception. Someone beat me to it, of course. Authors in this issue include Dan Cushman, Lee E. Wells, Rollin Brown, Ben Frank, Richard Brister, and John A. Saxon.
Posted by James Reasoner at 6:00 AM

Aw yeah. James, every time you post a Lariat cover I’m so tickled I can’t help commenting. I mean, was Norman Saunders some kind of pulp art genius or what? Say what you want about his technique, could anybody cram so many nifty, imaginative details into a cover painting? I mean, just look at it.

The whole story is right there and plain as a heavy handed fist in your face. Villains are poisoning the waterhole where the heroine’s cattle drink and she’s caught them at it. You can tell, because in the background there’s a guy holding a big sack labelled, in huge letters, POISON, while another guy pours the contents of an identical sack into the water, leaving an evil looking black stain spreading downstream. In case the dastards motives are unclear there are skeletons of two steer half submerged in the stream at their feet.
Since this isn’t dramatic enough, the action described above is taking place during a hurtling, point blank gunfight.

In the foreground, the brave heroine rides rampant, desperately waving her scarlet cape to drive off the herd of cattle coming to drink from the tainted stream. The cape forms a beautiful arch, framing the action and making a bright background for the magazine’s title. The heroine is perhaps not as pin-up worthy as those on the covers of many other issues of Lariat, but her extended expanse of leg was probably noted with approval by readers in 1946.
And as a capper, check out the face of our heroine’s horse. He looks right at you and seems to grin. “Heh, heh. Pretty cool, huh?”

Genius, I tell you.
John Hocking

John is right about LARIAT STORIES, in fact the entire Fiction House stable of magazines had great covers. NORTHWEST STORIES, ACTION STORIES, PLANET STORIES, JUNGLE STORIES, etc. FIGHT STORIES kept the covers on the subject of boxing as I remember but all the other titles were insane.

I got to talk to Norman Saunders at three conventions(two Pulpcons and a paperback show) and he was a great guest at the conventions. He was really surprised to discover that his art was still appreciated many years after the pulps died.

Hey, after all my early morning ranting about the greatness of Norman Saunders, it occurs to me that this cover might be by Anderson. The heroine looks more like one of his characters, and that looks more like one of his poses.
The cartoonish detail in the background, funky face on the horse, and the sheer dense-pack detail make me think Saunders.
But that long leg is so Anderson...
Unless this is another artist I don't know at all and I'm just babbling here.
Anybody out there got pulp-artist wisdom? James, is this a Saunders?

Regardless of authorship, I maintain that this painting is the work of a master.

Now that I carefully look at the cover, I would have to say that it is by Anderson and not Saunders. Anderson did many covers for Fiction House of course.

I believe this is Anderson's work, too. It looks almost like a Senorita Scorpion cover.