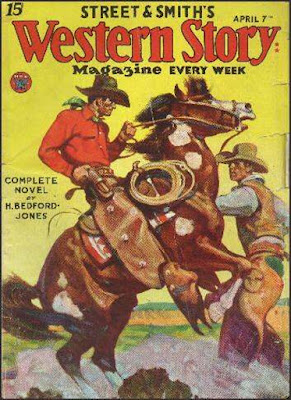 This "complete novel" (more like a 30,000 word novella, actually) tells the story of Larry Luckin, a young rancher whose spread is stolen from him through a series of tricky legal maneuvers by cattle baron Ezra Pickering and Pickering's two sons Slim and Red. Following the auction in which Red Pickering buys Larry's ranch for the back taxes supposedly owed on it, Larry plans to take up his gun and go out fighting. But on his way to the Pickering ranch, he runs across a young woman being kidnapped and rescues her instead of going on the owlhoot. Larry is wounded, and he and the girl wind up having to hike across a desert known as the Devil's Frying Pan to seek refuge in the Skeleton Mountains. There they find an isolated shack that an old prospector told Larry about, and he recuperates from his wound just in time to deal with a bunch of outlaws who show up planning to use the cabin as their hideout. The young woman is Ezra Pickering's niece, but she has no fondness for her uncle and agrees to help Larry get his ranch back--legally instead of at the point of a gun.

The plot of this one is pure pulp, but what sets it apart is Bedford-Jones' terse, realistic writing style. There's none of the overdone Western dialect that pops up so often in other pulp stories, and he writes excellent action scenes. Also, though the set-up in a Bedford-Jones Western story is usually the standard stuff, he always finds a twist or two to throw at the reader. In this case, there's a romantic triangle between the hero, a rancher's daughter, and a spoiled girl from the East, but the resolution takes some turns that similar situations don't in other stories. Like all the other Bedford-Jones Western I've read, this one is excellent.
Posted by James Reasoner at 5:30 AM

Bedford-Jones is one of my favorite authors, a can't miss sort of guy. I'm trying to keep up with Altus Press's H. Bedford-Jones library and hope it goes on and on. He certainly wrote enough. Love the guy.

Like Rick, I'm a fan of Bedford-Jones. Altus Press has published some nice volumes! The guy had versatility!

I should Go Look, but he was primarily a broad-spectrum historical fiction guy, no? Prone to adventure stories, naturally...I've barely read him. I should fix that.

Bedford-Jones is probably best known for his historical fiction, but he wrote almost everything: Westerns, mysteries, horror, war, a little bit of science fiction and fantasy. Most of it very good. His mysteries and thrillers strike me as his weakest work, but still readable.

If interested in more about H. Bedford-Jones, there is a book that gives information about him called KING OF THE PULPS: The life and Writings of H. Bedford-Jones. He wrote for all the quality pulps, especially BLUE BOOK during the thirties and forties. He had hundreds of adventure stories in the magazine and BLUE BOOK was a top pulp market that paid good rates.

The Seal of John Solomon is my favorite HB-J and one of my favorite lost races tales ever. Published in an early Argosy issue and recommended to me by Ed Hulse. I've enjoyed most of the things I've read by him, but the aforementioned piece is the one I would label as excellent.

Is this one in one of the collections?

Bedford-Jones had a difficult time selling his stories after World War II. In just those few years reading tastes had changed to such a degree that the "King of the Pulps" was passe. Bedford-Jones relunctantly had to change his writing style to appease the post-war editors. Sadly, he had only a few years to do this; he died in 1949.

Rick,
No, as far as I know "Larry's Luck" has never been reprinted. I read it in that issue of WESTERN STORY a while back. A collection of Bedford-Jones's Westerns would be a good thing, but there's so much, in so many different genres, that I don't know if any of the pulp reprint publishers will ever get around to it.

Jerry,
His "Rajah From Hell" series is a good example of that change in his style, four connected thrillers published under the Gordon Keyne pseudonym in BLUE BOOK in '46 and '47. They're slicker than his earlier stuff but very effective. And available in a collection from Black Dog Books with an intro by yours truly.

One can never have enough of HB-J. And I suspect that there is too much to be had. But I'm trying. He's my hero.