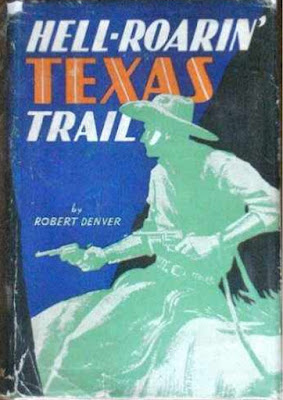 HELL-ROARIN’ TEXAS TRAIL is one of only two full-length novels written by prolific Western pulp author Ray Nafziger. The other, GUN SMOKE AT DAWN, also under the pseudonym Robert Denver, was published only in England and is hard to find. I was able to get my hands on a copy of HELL-ROARIN’ TEXAS TRAIL, though, and I’m glad I did because it’s a pretty entertaining Western.

The protagonist is a young Texan named Brand Bonnell. Fast with a gun, good with cards, Brand is something of a hell-raiser who has been drifting for several years after leaving home because of a fight with his father. He’s decided it’s time to return home, though, and no sooner does he get back in Texas than he stumbles over a plot to steal his father’s herd and some cattle belonging to a neighboring rancher, while the two herds are being driven to Colorado. The outlaws behind the scheme are Silver Lago and Crow Hargers, assisted by Hargers’ two equally evil brothers. Despite the friction between Brand and his father, of course he resolves to stop the outlaws from carrying out their plan, even if it means taking over the trail drive himself.

This set-up leads to a very episodic novel, as Brand and his friends, old codger Gobbler Gillette and reformed train robber Dick Steen, foil the schemes of Lago and Hargers. Along the way Brand rescues and falls in love with the beautiful daughter of the other rancher. The meandering nature of the plot is the biggest weakness of HELL-ROARIN’ TEXAS TRAIL. On the other hand, even though it’s a little lacking in narrative drive, there are some great individual scenes, such as one where Brand is almost lynched from a windmill and a big gun-battle in the middle of a blizzard. Nafziger writes excellent action scenes, and the conflict between Brand and his father gives the book a little darker edge than most Westerns published in the early Thirties. There’s too much “yuh mangy polecat” dialect, but you almost have to expect that given the era.

As is the case with many of the pulp authors, Nafziger spent most of his time writing novelettes and novellas, and as a result a longer book like this can suffer pacing problems. But there’s a lot of top-notch writing in HELL-ROARIN’ TEXAS TRAIL, and overall I enjoyed it a great deal. That makes me even more interested in reading some of his pulp work, and luckily there’s plenty of it, although not much has been reprinted. He was prolific under his own name and also the pseudonym Robert Dale Denver, and I’m going to be on the lookout for both names from now on.
Posted by James Reasoner at 6:00 AM

I can't find much on the Web about Nafziger. He probably died pre-1960. Hard to find information on Pulp's lesser lights who lived before 1960. I've searched high and low for some good info on H.A. DeRosso and just can't find anything. I'm going to make a pilgrimage to his hometown of Hurley, WI, as soon as everything thaws out here in Minnesota. Just for kicks and giggles. Maybe someone remembers the name but probably not. I'll have a burger and a beer in a little bar on main street and pretend Henry sat there.

This is interesting. I will be on the lookout for some of his work too.

Pete,
The Fictionmags Index gives Nafziger's full name as Raymond Earl Nafziger and says he died in 1946. They don't have a birth year for him. The earliest story of his listed in the FMI is from 1922. He seems to have been writing all the way to his death, as stories were appearing regularly in the Popular Publications Western pulps as late as December 1946. There were also a handful of stories published posthumously, with the last ones appearing in the early Fifties. In the introduction to Nafziger's story in the anthology STAR WESTERN, Jon Tuska says that in addition to writing Nafziger owned a cotton and alfalfa farm on the Rio Grande in New Mexico. Tuska also claims that Nafziger was the pseudonym and Robert Dale Denver was his real name, instead of the other way around. That seems unlikely to me, but hey, I wasn't there.

Wow! Thanks for the info, James. I don't know why but I thrive on that kind of stuff. That he owned a plantation on the Rio Grande is especially fascinating. Adds a new wrinkle. I think there are a lot of writers from that time who died young because they sat too many hours in front of the machine smoking one coffin nail after another. Nafziger's plantation doesn't make that such an easy assumption, for some reason. He probably at least got some exercise...

It's nice to hear that this full length Nafziger was good----I enjoy his short works more than most of his pulp western contemporaries (excepting Brand, of course). I intend to check this one out. Thanks for posting!