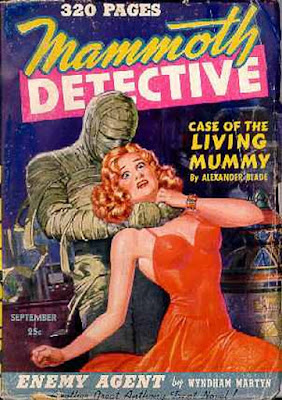 I'm sure there are people who collect mummy covers. This is a pretty good one. And with stories by William P. McGivern, Howard Browne, Dwight V. Swain, Robert Leslie Bellem, G.T. Fleming-Roberts, George Armin Shaftel, the ubiquitous Alexander Blade, and more, this issue of MAMMOTH DETECTIVE is probably pretty good reading, too.
Posted by James Reasoner at 6:00 AM

Some of these issues were the size of a telephone directory. There were 4 crazy titles: MAMMOTH DETECTIVE, MAMMOTH MYSTERY, MAMMOTH WESTERN, and MAMMOTH ADVENTURE. The only reason that they did not do a mammoth SF is because they already were publishing AMAZING and FANTASTIC ADVENTURES.

I have 4 bound volumes of this title that I acquired from my friend, the late Andy Biegel, Jr. They all have the stamp of Howard Browne. Neat magazine.

No one seems to have made the inevitable comment about these collectors having mummy issues. :-) Sorry.

I'm certainly wondering at the quality control of a pulp boasting quantity like this. Curious if anybody good is in Mammoth Adventure and if these tomes are just brimming with reprints...

And Walker Martin---I just dug up the Blood N Thunder issue on Adventure, and you'll be happy to know I bought the Adventure January 3, 1920 issue that you recommended. This has fewer authors I know than the other issues I've purchased (though that can be a good thing in terms of discovery), but it's got Arthur O. Friel, who for me is second only to the master Harold Lamb, and I don't yet know Beadle, who I know is famous. Mostly your recommendation and the fact that Beadle's story is a lost race tale clinched it for me. I'll report back after I've read it...though my reading piles are pretty high...

If any other lost race highlights in Adventure (or Argosy) come to mind, feel free to recommend them, especially any that are complete in one issue. That's a favorite sub-genre of mine.

(Also, I just finished the April 1929 issue of Frontier Stories with an INCREDIBLE Jimmie Cordie story, 'Right Smack at You!' and another gem by L. Patrick Greene, who is qualitatively right behind Friel. Good pulp overall--I'll check out more.)

The Mammoth titles did not use reprints but the overall quality was not that high. Ziff Davis was not one of the quality publishers like Popular Publications or even Street & Smith. However, they did occasionally print good stories. For instance Roy Huggins had a complete detective novel in MAMMOTH DETECTIVE or MAMMOTH MYSTERY and Howard Browne had two or three of his Paul Pine detective novels in MAMMOTH. Also Robert Bloch had several stories. But for the most part, the stories were mediocre.

I just looked at my copy of the January 3, 1920 ADVENTURE again and what an impressive issue! Editor Arthur Sullivant Hoffman was against SF and the supernatural, yet Stribling's "The Green Splotches" is the first off the trail story and good SF. I think Beadle's "The Alabaster Goddess" is a great lost race tale and the sequel appeared in the mid-September 1920 issue. Plus there is Arthur Friel.

FRONTIER STORIES is an excellent magazine but only during the period when Doubleday published it, 1924-1929. After 1929 the new publisher occasionally published good fiction but it was not a quality magazine like with Doubleday. Check out WEST during it's Doubleday period also, 1926-1934. And of course SHORT STORIES was one of the better general fiction titles under Doubleday.

By the way, I guess you may have missed the one day Pulp Adventurecon in Bordentown, NJ on November 7, 2015. I did a report with photos by Sai Shankar at the Mystery File blog: http://mysteryfile.com/blog/?p=36666. I mention this not only to plug an excellent one day pulp show but also to mention that I completed a 40 year project that I never thought I'd finish. I found the final 4 issues of ALL STORY and now have all 444 issue, 1905-1920. I still can't believe it...

Todd Mason--thanks for the listing. Most of these writers I don't know.

Walker Martin--congrats on your All Story file. Wow, that's impressive. And I'm looking into Short Stories as well...last week I found an issue with L. Patrick Greene and a Bedford-Jones lead story to begin my investigations, though I've got piles of Adventure and Argosy as well as issues of Weird Tales, Dime Detective, Spider, Op #5, and Jungle Stories and a lone, good-looking issue of Black Mask. I am careful but slow reader in general, so I try to keep my reading itinerary reasonable, though the last three years about 70% of my reading has been pulps.

And earlier you mentioned having some original cover paintings for Adventure...if you ever think about selling one of those from the ASH era--or hear about one for sale--feel free to reach out to me...

I wish I had an ADVENTURE cover painting from the ASH era but the 5 I have all are later covers. The earliest one is when A.A. Proctor was editor in the early 1930's. Then I have 3 in the 1940's when Ken White was editor and one from 1951.

Thanks Todd for listing the contents of the MAMMOTH DETECTIVE. Some familiar writers like Bellem, Howard Browne, McGivern, Fleming-Roberts. Also Martyn, Swain, and Shaftel.