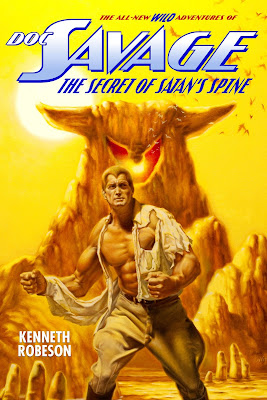 All of Will Murray's Doc Savage novels have made me feel like I was back in high school, reading one of the Bantam paperbacks that I bought the first Tuesday of every month at Mott's Five-and-Ten Cent Store. (I doubt if anything in there was actually five cents or ten cents, but what the hey.) Murray's most recent Doc novel, THE SECRET OF SATAN'S SPINE, evidently based on an unused outline by series creator Lester Dent, really captured that feeling for me. I might as well have been back in that World War II-era army barracks my high school used as the study hall.

I realize I'm wallowing too much in nostalgia, but it's hard not to with these books. I mean, look at that great Bama-like cover by Joe DeVito. Kudos, too, to Matt Moring, who makes the layout of the pages look like those iconic Bantam editions.

But what about the story, you ask? Well, it's classic Doc Savage, as you'd expect from Will Murray. Monk Mayfair falls for a beautiful blonde who winds up being kidnapped. It's all a ruse to keep him from sailing to England to do some important war work for the Allies (this one is set in 1943). Doc, Monk, and Ham Brooks wind up on the ship that Monk planned to take anyway, but there are a bunch of villains on board, as well as some unexpected friends from one of the original novels by Lester Dent. There's a mysterious, sinister island in the Caribbean called Satan's Cay, and of course that's where you'd expect to find Satan's Spine, the secret of which is creepy, awe-inspiring, and also connected to some of the previous adventures of Doc and his crew. On top of all that, our heroes have to deal with a monster of a hurricane that's looming through most of the book before it finally strikes.

Add all that up and you've got pure pulp adventure of the sort that I love. As I've probably said before, when I bought the paperback of METEOR MENACE (my first Doc Savage novel), I never dreamed I'd still be reading new stories about him more than fifty years later. But I'm very glad that I am, and THE SECRET OF SATAN'S SPINE is great reading for any Doc fan.

I may have said this before, but it is just so, so cool that Murray is using outlines from Dent himself. Glad to hear about the Caribbean setting because the cover just scream desert.

Go ahead and wallow in nostalgia all you want, James. Your book & movie reviews always get my day off to a good start!

I have just about all of these New Wild Adventures, and have read about half of them Great stuff, but I must say I think Murray could - please! - tone down the back-and-forth between Ham and Monk. Enough, already! I know there was a lot of it in the originals, but there seems to be even more in these new books and for me, they really detract from the storyline. That doesn't keep me from buying them, but it makes them less fun to read.