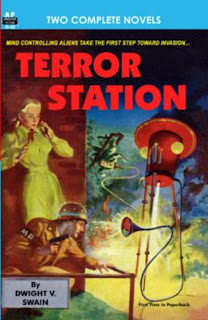 I guess I've been watching too many of those 1950s science fiction movies lately, because I was in the mood to read something along those lines. What better place to look for it than the pages of the SF digests from that era, especially those published by William Hamling?

Well, you could check out a publishing company called Armchair Fiction, which has reprinted a lot of short novels from those magazines. That's where I read Dwight V. Swain's TERROR STATION, which appeared originally in the September 1955 issue of IMAGINATIVE TALES, with a cover by Harold W. Macauley that matches the story quite well. I met Dwight Swain at a convention in Oklahoma City in 1991, a year before he passed away, and I'm glad I got a chance to talk to him, even briefly. I hadn't read much of his work at the time, but I've since read quite a bit and enjoyed most of it.

TERROR STATION, like a lot of those movies I was talking about, is set in the desert, although it involves a military base, not a small town. The protagonist is Carl Stone, the head of security for the base, where some top-secret research is going on. Stone is driving back to the base one night, returning from a trip to Washington, when a terrified woman runs out in front of his headlights, an opening a little reminiscent of Mickey Spillane's KISS ME, DEADLY. 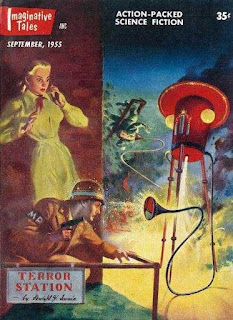 The story isn't the least bit Spillane-like after that, however. The woman is being pursued by a tentacle-waving alien. Stone tries to rescue her, but she's cut down by a death ray. The alien gets away. But when Stone takes the woman's body to the base, nobody believes him about the alien, and he's accused of murdering her. Everybody on the base is on edge and paranoid and acting out of character, including the director of the research project, who's Stone's old friend, and the base psychiatrist, who happens to be Stone's former girlfriend. Could it be that the evil aliens are influencing their minds? Why has a mysterious giant tower been erected on the base while Stone was gone? What are those strange lights in the sky?

I think you can probably answer all those questions without even reading the book, but if you're looking for a groundbreaking plot, TERROR STATION isn't the place. If you're in the mood for a slam-bang, two-fisted, hardboiled SF adventure yarn with a satisfying ending, this one is just about perfect. Swain really knew how to keep a story racing along for 30,000 words with hardly a pause for breath, and old geezer that I am, I had a great time reading it. I have a big stack of these Armchair Fiction double volumes, which are made to look a lot like the old Ace Doubles, so expect more posts like this to be showing up in the near future.

I also met Dwight Swain in 1991 but it was at Pulpcon 20. He was Guest of Honor along with Howard Browne. Sheldon Jaffrey and I formed a Dwight Swain fan club which had a membership of only two. You would have made three, James!

I met Dwight V. Swain in 1986 at the Bouchercon in Baltimore. I knew he'd be there, so I took a few copies of Imaginative Tales for him to sign. I believe that's the Bouchercon where Richard Moore, who didn't now Swain would be there, saw him in the elevator, read his name tag, and cried out, "Bring back my brain, it's Dwight V. Swain!" I started corresponding with Swain and met him at several other conventions. His wife, Joye, is on Facebook, but doesn't post. Mel Odom would know how she's doing, I think, and I should ask him.

I've never read "Bring Back My Brain!", but I have to admit, that title is the first thing I think of when I hear Dwight V. Swain's name.

Thanks for this. I've never read any of his work but I loved those old Ace 'double feature' paperbacks as a kid.

I'll have to dig out my copy of IMAGINATIVE TALES and read this one again. I bought my copy off the newsstand whey back then. Did not know it was an Ace double. Somehow I missed ever seeing it.

Barry,
It was never an Ace Double, the Armchair Fiction edition is just made to look like one. Get a whole bunch of those Armchair Fiction books stacked up, and except for the fact that they're trade paperbacks instead of mass market, they really look like a stack of Ace Doubles with all that blue and red.

Dwight used to write for Mystery Scene during my tenure as editor. We corresponded a lot and spoke at length several times. He was one of my early teen heroes with all those great stories in Madge and Madge Tales. He was also a hell of a good fiction teacher. Zebra published his last novel and he was delighted to see it on the stands. What a fine guy and wonderful pulpster.

Thanks for the update James, now I know why this "Ace" double slipped under my book radar.

"Bring back my brain" is going to stick with me awhile. Right up there with Plan 9.