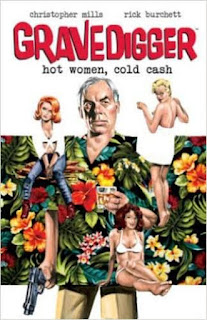 GRAVEDIGGER: HOT WOMEN, COLD CASH is a trade paperback collecting a pair of hardboiled crime yarns written by Christopher Mills with art by Rick Burchett. As you can tell by that great cover, the protagonist, "Gravedigger" McCrae was inspired visually by Lee Marvin, and there's a lot of Richard Stark/Donald E. Westlake influence, too, since the character is a professional criminal. There's also a bit of Dan J. Marlowe's THE NAME OF THE GAME IS DEATH in this graphic novel's lineage. These are all good things, of course, and Mills and Burchett make excellent use of these influences.

In the first story, "The Predators", Digger, as he's usually called, is in Florida trying to relax after a job, but when he gets involved with a mob boss's daughter things quickly go to hell and he finds himself targeted for death. There are some great scenes in the Everglades involving an airboat. I've never actually been on an airboat, but I find them fascinating anyway, for some reason. And of course I'm a sucker for swamp scenes.

The second story, "The Scavengers", is a heist yarn, very Parker-like in its planning, execution, and inevitable double- and triple-crosses. This one is set in the desert Southwest, another great locale for hardboiled and noir tales.

I like Burchett's stark, black-and-white art, and Mills' scripts race right along with fine dialogue and excellent voice-over narration from Digger. I haven't read any of Mills' other work, but I enjoyed this volume enough that I'm going to seek it out. If you're a fan of Darwyn Cooke's Parker adaptations, Ed Brubaker's CRIMINAL, or any of the other hardboiled/noir graphic novels out there, you definitely should check out GRAVEDIGGER: HOT WOMEN, COLD CASH. It's good stuff.

Thanks, James! I appreciate the kind words. You're quite right about the Dan J. Marlowe influence - and I'm pleased you noticed it.

Chris Mills is a fine writer and also a good artist in his own right. He did the covers of my Miles Jacoby reissues from Perfect Crime books, and they are awesome!

Cris also knows how to answer hard questions in cold blood, as you can see with these Seven Questions About Gravedigger.

And if you are interested in more hard-boiled comics (on the web), you may find some in my blog post Single Sentence Scrutiny: 11 Action / Thriller / Crime / Espionage Webcomics.

Okay, I finally snagged the memory-hook:

Back in the late 1960s (or early 70s?) there was a 1-shot mag along the lines of CREEPY. Graphic Novels hadn't been invented yet, so what we had were black-and-white magazine/comic-book hybrids.

The one I'm thinking of was titled "His Name is SAVAGE" and it featured a picture of a Lee Marvin lookalike underneath a logo familiar to readers of the Doc Savage pulps. And the story was a Dan J. Marlowe sort of thing.

Art was by Gil Kane, but from what I hear, the venture came to a sticky end....