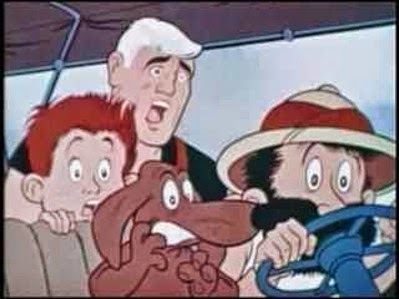 This cartoon was another favorite of mine when I was a kid. You'd have to have a kid's forgiving nature to be a fan of a show with such primitive animation and the bizarre technique of superimposing actual mouths over the drawings to provide movement when the characters talked. The stories were serialized in five-minute chunks each weekday, and then on either Saturday or Sunday they would all be aired together to make a half-hour episode. I watched every chance I got and probably came close to seeing all 52 stories that were produced. Clutch Cargo was a globe-trotting adventurer who looked like a cross between Dick Van Dyke and Race Bannon (from a better cartoon show). He got into assorted scrapes along with his young ward Spinner and their comic relief dog Paddlefoot. As I recall, the stories actually weren't bad, typical pulpish adventures, and that's probably what drew me in. The entire series has been released on DVD, and many complete episodes are available on YouTube.
Posted by James Reasoner at 5:30 AM

I was into m teens when such cartoons as this became popular with the kids crowded around the set. I was raised on Bugs Bunny and Mighty Mouse which for me was such a high standard that I couldn't even accept the these were drawn nor how the action was produced. My old favorites were painstakingly animated with so many more drawings per foot of film. I guess that quality and my age were factors in my never enjoying the cartoons of this particular era.

Jeez, I loved Clutch Cargo! Hadn't thought about him in years ... Lantern-jawed, broad-shouldered, not overly bright, but stoic (which could hardly be helped, given the limited expression/movement range allowed by the animation) and heroic as all get out ... My art teacher in high school often berated me because he said my people drawings always looked like they came out of Johnny Quest or Clutch Cargo cartoons. (Not that *I* saw anything wrong with that ... But you know what? As I write this I am glancing up at a picture that hangs on the wall above my desk - a copy of the cover from the first issue of my Hardboiled Magazine (drawn by me, because I had nobody else) - and damned if the snarling, grit- jawed PI pictured there (meant to be Joe Hannibal) doesn't look almost exactly like ol' Clutch, except for darker hair ... I guess some influences hit early and sink deeper than we realize.

If you have ROKU, they carry a Clutch Cargo channel. And it's free. (As a Kid, I was a little freaked out staring at those ruby red lips moving and the rest of the scene standing still)

I don't think I ever caught this one.

Lord, there were so many serialized cartoons in those days ... Besides Clutch, there was Crusader Rabbit, Spunky and Tadpole, Q.T. Hush, Rocket Robin Hood, Space Angel and many others. Idea being to get the kids to tune in tomorrow -- except the hodge podge cartoon dumps that ran this stuff couldn't be bothered to keep them in order or on consecutive days.

Sidenote -- I found Q.T. Hush on DVD a while back and was chagrined at how much filler there was to the story.

Of course, the best serialized cartoons were, and are, Rocky and Bullwinkle.

Yes, even then I knew ROCKY AND BULLWINKLE was something special.

A cross between Dick Van Dyke and Race Bannon--that's hilarious! Those mouths sure were creepy!