Reading Sean Howe's MARVEL COMICS: THE UNTOLD STORY reminded me of these books, which were oversized, "bedsheet" books that came out in the early Seventies, published by the author's own company, Supergraphics. They were the first real comics history books I ever read. Surprisingly, I don't remember where I bought them, but I certainly remember reading them.

I was already a fan of Jim Steranko, who did some great, groundbreaking work as writer/artist on the NICK FURY, AGENT OF S.H.I.E.L.D. comic book. Also during this era, he painted the covers for Jove/HBJ's paperback reprints of some of the Shadow pulp novels, which I also read regularly. By the time I found these volumes on the history of comics, I already knew a little about the subject, but not nearly as much as Jim Steranko did.

Even better, Volume 1 actually has a lot in it about the history of pulp magazines, too, also a subject of great interest to me. Volume 1 covers pulps and the so-called Golden Age of Comics, the Forties. Volume 2 is concerned mainly with the late Fifties and the Sixties, known as the Silver Age. Fascinating stuff, great illustrations. I just got lost in these books for days, learned a great deal, and was thoroughly entertained at the same time. Copies are a little pricey these days, but if you're a comics fan and haven't read them, they're probably worth it.

UPDATE: It's been pointed out to me that Volume 2 covers more of the Golden Age, not the Silver Age. My memory has betrayed me again.

Below are the spectacular wraparound covers of both volumes. 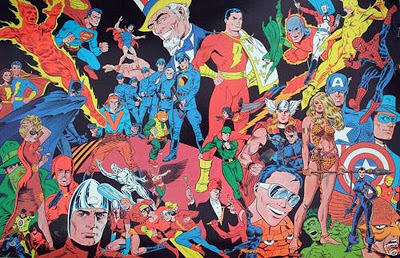 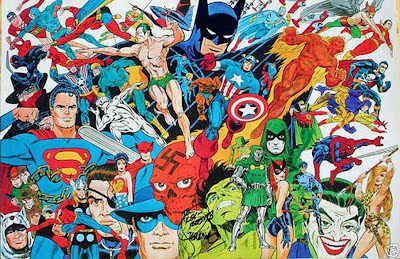 I remember those, as well. Still have them, too. Taught me a hell of a lot about the pulps at a time when there was little pulp scholarship out there.

These are great books! Now, there are several historical books about the history of comic books. But, back when these books were published, they were about the only game in town. Thanks for the memories!

I think you should take another look at Volume 2. It did not deal with the late fifties and sixties, but also dealt with the 1940's.

Tony, I think you're right. My copies of the books are long gone, so I was going on my memory, always a risky proposition. Writing by the seat of my pants, as I commented on another post.

Great books, and I still have 'em. Probably my intro to comic book history, too. And though I'd long since discovered Doc Savage, Tarzan and The Avenger, that first volume was also my intro to pulp history.

There was a time when it seemed like every book by Ron Goulart had a minor character named Steranko.

Basically these two books, along with All in Color for a Dime, were my introduction and education for the comics of the Golden Age about 1973. Still a terrific grounding in the history of comics.

Just like Charles, it was Steranko and ALL IN COLOR FOR A DIME. Those books fueled a fire to seek out stuff --some of which I've yet to read. A real lifetime of entertainment.

ALL IN COLOR FOR A DIME is another great book. Even though comics and pulp fandom existed before the early Seventies, there was a real feeling then that we were getting in on the ground floor of something wonderful.