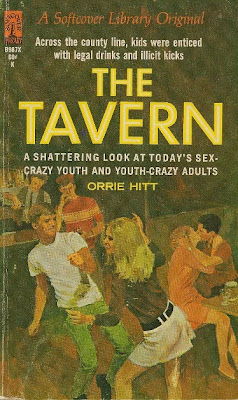 It’s been a while since I read an Orrie Hitt book, so this seemed like a good time. THE TAVERN was published in 1966, very late in his career. It also has some personal meaning to me, because I had a copy of this one before the fire but never got around to reading it. It may have been the only Orrie Hitt novel I owned at that time. I might have had one more, but I can’t remember for sure. For some reason, copies of his books just never showed up in the used bookstores around here.


This one revisits many of Hitt’s usual themes but also has some interesting differences. The protagonist is Hal Mason, a young man just out of high school who goes to work as a bartender at Mike’s Place, a rundown tavern just over the county line from the county where Hal and his friends live. You see, the drinking age in the county where Hal lives is 21, while in the next county, where Mike’s is located, it’s 18. So naturally, all the kids go across the line to Mike’s to get drunk. As usual in a Hitt novel, that’s not the only line they cross.


Hal’s youth and relative inexperience set him apart from most of Hitt’s protagonists, but he’s still worldly enough to be juggling the standard three women: Wanda, the good girl (one of many Wandas in Hitt novels); Gert, the slut with a good heart; and Tina, the stripper who’s married to Mike, the owner of the tavern. Of the three, Hal falls hardest for Tina, who is, of course, exactly the one he shouldn’t get involved with. Eventually, blackmail and murder rear their ugly heads.


Hitt has done all this many times before in his books, but the character of Hal makes THE TAVERN an interesting novel. He considers himself a heel-in-training, so to speak, but despite a few slips, he’s such a decent kid at heart that this book might almost be titled ANDY HARDY GETS LAID. Which brings up another point: other than the blonde’s outfit on the cover and the fact that Hal drives a Renault, there’s no sense that this book is set in the Swinging Sixties. It might as well take place in the Forties or Fifties, which gives it a certain nostalgic charm.


Other than an ending that seems a little rushed, as if Hitt realized he’d made his word count, THE TAVERN is a pretty good book, very readable and fast-paced. At this point, Hitt didn’t have many books left in him – I believe he died in 1967 – and he seems to have mellowed slightly, but this novel still has plenty of drive to it. If you run across a copy, I recommend that you grab it. THE TAVERN is well worth reading, and I’m glad I replaced the copy I lost and finally read it.
Posted by James Reasoner at 6:00 AM

Old Cousin Hal was a hellion, no doubt about it. This one, for reasons not readily apparent to me, actually sounds more compelling than the other Hitt novels discussed over the last year or so...I wonder how tought it'd be to find.

There are nine copies listed on ABE at the moment, none of them exactly cheap but not as pricey as some of the Hitts unless you want one in really good condition.

Another Orrie Hitt book I've never seen before. I'm starting to think they weren't distributed in this part of the country.

Back in the Seventies when there were a lot of used bookstores in this area and I was hitting them all on a regular basis, the only sleaze novels that showed up with any regularity were published by Beacon or its successor, Softcover Library. Hardly ever saw a Midwood or any of the Hamling imprints. But even though Hitt wrote a lot for Beacon, those books didn't show up around here, either. Distribution back then was certainly hit-and-miss.

I drove a Renault Caravelle, the French version of the Volkswagen Karmen Ghia, in the Sixties. Thought I was cool having a convertible in the summer and able to put the removable hardtop on for our cold Canadian winters. Why does driving a Renault connect the book to the Sixties? May have to find a copy of this book.

The Renault connection to the Sixties may be more of a personal thing for me because my dad drove one then. It seems like there was a lot more of them around during that era, at least where I lived.

Volkswagens were far and away more common, though. I had a number of friends who drove either bugs or minibuses, and one who had a Karmen Ghia and was really proud of it. I hadn't thought about that in years.

Some day I will find one of these in my used bookstore shopping.