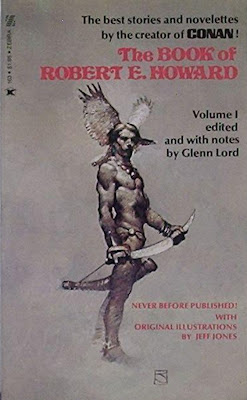 Between the ages of 18 and 23, I read a lot of books. I was in college part of that time, and the other part I was a young married guy trying to break in as a writer. As a matter of fact, I was 23 when I sold my first story. I read Doc Savage novels, Matt Helm novels, Saint novels, assorted Westerns, a ton of mystery novels, at least two tons of comic books, quite a bit of science fiction. I went through a literary phase where I read a lot of Hemingway (I read THE SUN ALSO RISES at least twice during that period and almost wrote about it for this post) and F. Scott Fitzgerald. I read quite a bit of historical adventure fiction by the likes of Frank Yerby and Rafael Sabatini (SCARAMOUCHE was a favorite of mine, a great swashbuckler). But there was one book I read that was really special to me. Some of you could probably guess the author, even if it wasn’t right up there in the post title.


I’m talking about THE BOOK OF ROBERT E. HOWARD.


I bought it off the paperback rack (it was a wall rack by then, not a spinner) in Thrifty Drug Store, where I bought a lot of paperbacks, digest magazines, and comics over the years and in all of its various incarnations. (The store changed hands four or five times while I was buying stuff there.) I think it was a Sunday morning when I bought THE BOOK OF ROBERT E. HOWARD, but I may be wrong about that. But whenever it was, I know one thing: I took it home and immediately began to read it.


You see, before that I had read all the Lancer editions of Howard’s Conan stories. I didn’t know the full story then about the involvement of L. Sprague de Camp and Lin Carter with these stories, all I knew was that I really liked the ones written by Howard and published in WEIRD TALES during the Thirties. Of course, even those weren’t pure Howard as published in the Lancers, but close enough to make me a fan for life. I’d also read the Lancer edition of the Kull stories. But even though I knew from de Camp’s introductions to the various volumes that Howard had written other things besides sword-and-sorcery yarns, I hadn’t read any of them until I picked up that copy of THE BOOK OF ROBERT E. HOWARD. My reaction to it was simple, yet overwhelming.


This guy could write anything.


There were humorous Westerns and serious Westerns, boxing yarns that were slapstick comedies and ones that were grim and bloody, historical adventures with just as much swashbuckling and swordplay as the sword-and-sorcery tales, detective stories that were more about headlong action than detection, creepy and atmospheric horror stories . . . Well, maybe I exaggerated slightly when I said that Howard could write anything. Not every single genre of fiction is represented among his work, of course. But not only was he able to write across a wide swath of the pulp market, but he had also done an excellent job of it.


Why should you dig up a copy of THE BOOK OF ROBERT E. HOWARD and read it, if you haven’t already? Because it’s incredibly entertaining, and the Zebra edition has a pretty nice (if a little bizarre) Jeff Jones cover. You’ll get a fine cross-section of Howard’s stories. Zebra also published THE SECOND BOOK OF ROBERT E. HOWARD, THE VULTURES OF WHAPETON, THE LOST VALLEY OF ISKANDER, THE IRON MAN, THE INCREDIBLE ADVENTURES OF DENNIS DORGAN, WOLVES FROM THE SEA, etc. All of them are very much worth reading.


Most of this stuff has been reprinted in recent years in beautiful editions from Del Rey, Bison Books, and others, with the purest text possible and in some cases versions that have never been published before, and I highly recommend all of them. I own most of them, and when I reread Howard, it’s usually these newer editions I read.


But for sheer nostalgia, for taking me back instantly to that period of my life between the ages of 18 and 23, nothing has quite the same kick as THE BOOK OF ROBERT E. HOWARD. That copy I bought in Thrifty Drug Store is long gone, but I may just have to hunt up another one. I think I’d like to read those yarns again, in the book where I first discovered them.
Posted by James Reasoner at 12:05 AM

Around 1976, then? About one or three years later, I'd be gathering up my Fritz Leiber and Robert Bloch retrospectives, such as THE BOOK OF FRITZ LEIBER and THE BEST OF ROBERT BLOCH, and finding my own books of gold, to borrow Gene Wolfe's impossibly apt phrase. By 1979, Zebra was, so briefly, publishing Roy Torgeson's adventurous anthologies...

I bought all those Zebra editions, too. Good times, good times.

Great post, James. I nearly did Gatsby myself but I think I actually fell in love with Jay in high school. My other choice was John D. MacDonald.

Todd,
Yeah, it was 1976, sometime before August because I'm pretty sure Livia and I weren't married yet.

Patti,
I've never forgotten checking GATSBY out of the library and having the clerk ask me what class it was for. "It's not for a class," I said. "I just want to read it."

I loved those ZEBRA Howards, too. At one time, I bought pretty much everything ZEBRA published. And I liked the Jeff Jones covers as well.

Yes, now this was one I sank my teeth into as well, though I didn't read it until later in my life.

For a B-list outfit, Zebra came up with nice packaging for the Howard books, especially SOWERS OF THE THUNDER. I wonder, though, how many readers got ticked off by their bait-and-switch tactic of making the western and boxing collections look (at least without more careful investigation) like fantasy collections. And then there were Zebra's Tros of Samothrace volumes "in the tradition of ROBERT E. HOWARD, creator of CONAN," with Talbot Mundy's byline in real small type.

The boxing and Western collections didn't bother me because I discovered that I love those stories, too, but I imagine some readers were upset, all right.

For a while there, nearly everything was "In the Tradition of CONAN!", wasn't it?

Yes, this was a magical line :-) From Lin Carter to Poul Anderson, everything was in "the tradition of Conan".

The german edition of the Lancer books were also my first introduction to Howard. I think I was 15 or so. Still love his work.

I scarfed up all those Howard Zebras too. My favorite, though I never read it because I had the Don Grant edition, was A Gent from Bear Creek.

For me, if memory serves correctly, the intro to Howard came via the two Pyramid paperback anthologies from Weird Tales, then the Robert A. W. Lowndes-edited reprint digest mags published by a company called "Health Knowledge", followed closely by the Lancer Conans and Kull, and some UK budget-paperback reprints of Solomon Kane. Somewhere in there, too, were several multi-fantasy-author anthos and most importantly the big, all-Howard Skull Face Omnibus, a UK edition from Neville Spearman of a book first published by August Derleth's Arkham House. Just listing all of that in brief reminds me of how many "forgotten" books there are I just have to re-read!

For me the shining moment was discovering the first Lancer Conan collection. I had been hearing for the last couple years how this or that book was 'in the tradition of Conan.' And here at long last Conan himself! It was like nirvana. By the time the Zebra books came out REHUPA has been all up in arms about deCamp, a pleasant man I had the honor of sharing of GOH gig with. Zebra was up for printing a lot of unconventional stuff in those days.b When you're playing third string what else can you do. That was a good book, as were most of Howard's stuff. (Just never cared for the boxing stuff.)

My first one was a hammered near falling apart Zebra copy of Tigers of the Sea, those Cormac tales moved me!

David,
Yeah, it's TIGERS OF THE SEA, I got that title wrong in my post. That's what I get for relying on my memory! I do, however, remember exactly where I bought my copy of that book.

I loved the Bran Mak Morn book by Zebra. It may have been called KINGS IN THE NIGHT. I had most of those zepra editions including Pigeons from Hell. Great stuff, I bought it all used for a dollar or so around '79 or '80.

I don't read fantasy anymore. Except for Howard and Moorcock I've found the genre too full of cliches. Except that guy that wrote DARKNESS WEAVES (maybe also published by Zebra).

Dan,
You're thinking of the great Karl Edward Wagner. DARKNESS WEAVES was originally published in a heavily edited version by some small California paperback house, Powell Books, maybe, and then later published with all the other Kane stuff by Warner Books.