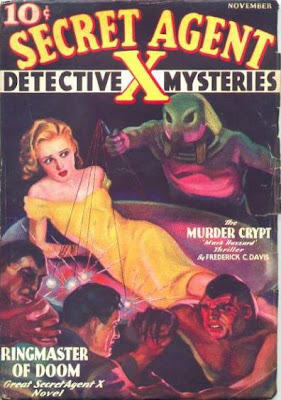 When you saw the title RINGMASTER OF DOOM and the by-line Brant House, you probably thought, “Hey, a Secret Agent X novel about the circus!” I know that’s the first thing that went through my mind. Well, as it turns out, this is a Secret Agent X novel, all right, from the November 1935 issue of the pulp magazine of the same name, but there’s no sign of a circus. But that doesn’t mean it’s not a good pulp yarn.


This one finds New York City being terrorized by a series of robberies and kidnappings being carried out by brutal, misshapen fiends who look like Neanderthal men. (And speaking of Neanderthals terrorizing modern-day America, I believe there’s a Spider novel by Norvell Page that features the same sort of menace.) Naturally, Secret Agent X has to investigate, and he starts at a fabulous society party being hosted by one of the rich men targeted for kidnapping. While he’s there he has his first violent encounter with one of the beast-men and also runs into a beautiful, redheaded, evil female spy he first crossed swords with during the Great War. From there it’s one breathless adventure after another as the Agent battles the schemes of the mysterious mastermind who calls himself Thoth, after the Egyptian god of the dead, and even wears an ibis-headed mask to make himself look like Thoth.


You know by now whether or not you love this stuff or think it’s just about the stupidest thing you’ve ever heard of. And you know which camp I fall into. You’ve got your Neanderthals serving as henchmen for a criminal genius. You’ve got said criminal genius lashing his prisoners with an electric whip. You’ve got Secret Agent X escaping death-trap after death-trap by the skin of his teeth. And finally you’ve got a battle royal in a network of abandoned sewers along the East River that’s being flooded. There’s not much time to take a breath in this one, and that’s good, of course, because it is wildly, unabashedly, and wonderfully goofy.


But no circus. That setting was a staple of pulp yarns. I don’t know if any of the Secret Agent X novels takes place in a circus, but it would have been a good setting for the Agent to have an adventure. As it is, RINGMASTER OF DOOM is a lot of fun, and as usual, it will soon be available in an affordable reprint edition from our friends at Beb Books.
Posted by James Reasoner at 12:05 AM

James, Your posts on Secret Agent X have spiked my interest. I see Kindle offers THE SECRET AGENT X OMNIBUS and I'm going to give it a try.

Since circus settings "freak me out" as my grandson says, it's just as well.

RINGMASTER OF DOOM. You don't see titles like at anymore.

Patti,
I love circus settings but haven't gotten to use them much in my own work. I think one of my Abilene books had a circus in it, and my story in THE AVENGER CHRONICLES was titled "Death in Clown Alley". But that may be it. Recently I sent in an outline for a series Western that had a traveling circus in it. The editor was fine with the idea, but the sales department nixed it, I don't know why. I'll save the plot and use it for something else later on.

I'm assuming this is a reprint. Who published it, when?

The reprint isn't out yet, but it should be soon from Beb Books (who is actually my friend Brian Earl Brown). The first page of his website is at:

and you can get to all the other pages from there. He has an abundance of inexpensive pulp reprints available, with more coming up all the time. Altus Press is also reprinting the Secret Agent X novels with several stories in each volume. Matt Moring does a great job with them, too. In a previous comment, David Cranmer points out that some of the books are available for the Kindle, but I haven't checked that out yet.

As many people have said, this is the new Golden Age of Pulp Reprints.

My index shows G. T. Fleming-Roberts was the author. His style was more the running around doing crazy stuff. Chadwick did more investigative plotting.

Matt Moring (Altus Press) are actually collaborating on reprinting the entire Secret Agent X series. We think it will be done by the end of 2011. I don't know if the Kindle edition is from Matt's files. We have talked about releasing ebook versions but I don't if Matt has gone ahead with that.

Brian,
Come to think of it, this one does sort of remind me of FACELESS FURY, and that's a Fleming-Roberts story, isn't it? I'll edit the post accordingly.

Hmmm...no Secret Agent X stories set around the circus you say. Someone should do something about that.