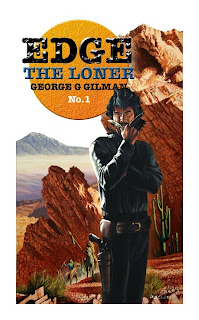 Starting tomorrow, the ebook reprint of the first novel in the long-running Edge Western series will be available from Amazon, Smashwords, and the other usual suspects.  The cover is a nice one, reminiscent of the original series but different as well.  The book includes a pair of fine introductions by the author, Terry Harknett, and our friend Gary Dobbs, who played a large part in making the series available again.
I first read this novel more years ago than I like to think about and enjoyed it a great deal.  Pinnacle published nearly fifty books in the series, and I read a lot of them (but not all).  Other books were published in England but not in the U.S., and in recent years Terry Harknett has written several sequels that take up the story of Edge's life as an older man.  This seems like a good time for me to reread the first one, which I intend to do in the near future.  I like books written in a distinctive voice, and the Edge novels certainly qualify.  At the time they first came out, there wasn't anything else like them, and although they were widely imitated, they still remain the prime example of Piccadilly Cowboy sub-genre of Westerns.  The Edge series probably isn't for all Western readers, but I've always liked it and hope its return is a triumphant one.
Posted by James Reasoner at 1:29 PM

I'm with you on this. I wnjoyed the series years back and look forward to getting reaquainted with it. I think it will hold up very well . . .

I'm looking forward to the read.

I have a hunch you'll enjoy the book, David.

I think I managed to get all forty-nine of the US publications(it's been a number of years and the books managed to filter from the house mostly(loaners and such) that it's hard to be sure. I've always been aware of the others, but the prices when you can find them(several hundred dollars for the 61st)...

I still have the site bookmarked for the six older Edges written later.

Lookig forward to this series.

This is timely for me. I just finished reading Ox-Bow Incident. Enjoyed it. Thanks, James.

Edge was good. Hard edged and violent, a lot of sex that "white hat cowboys" were just not supposed to enjoy (he preferred oral, and tended to force women to have sex with him, at least the first time). Carried a straight razor in a neck pouch that added quite a lot to the violence.

Harknett was kind of the best of the piccadilly cowboy genre - hard edged, and a better sell than JT Edson for sure.

Remember the other Harknett / George Gilman series - Adam Steele? Guy with his hair prematurely white from shock, an unusual weapon (colt revolving rifle or similar, with a fire blackened stock, some sort of back story about it being a gift from his dad, a fire etc).

I've read a couple of other Harknett series too - Jubal Cade (created + first two or three by him, but it became a franchise like longarm did), Undertaker (turkeyed, unfortunately - started off promising)..

There's never a mention that Edge preffered oral sex and he certainly never forced a woman to have sex with him
Some people have very selective memories, indicative of their own personalities.

If Gary Dobbs is reading these comments, please include a link to the book on the Kindle Store. I just checked and it's not showing up for me. I'd definitely like to download and read this.

According to Gary's blog, the book isn't available on Amazon yet after all, but it should be showing up there soon. Smashwords is supposed to have it available in Kindle format now, but I haven't gone there to check.

@anonymous - this is from reading several from the Edge series. I'll stand by the oral sex quote.

The later Edges though - did Harknett write all of them?

Terry Harknett wrote all the novels.
And there was not much sex in the novels. Actually it was a plot point of the character that he never paid for sex or forced himself on a woman.

Eh. The oral sex was definitely there. Though the force was more like - the woman doesnt really want to suck him and he's like "its that or nothing".

The first few were very good indeed - as were the one liners.

He never paid for it, or raped anyone. That's correct.

I loved the Edge series (although I was way too young for that kinda stuff!)... I had no idea there were later books about an older Edge, that's intriguing.

And where does this Oral sex stuff come from??????

At least two edge books where I've seen those incidents. I dont remember which ones as its some years since I last read one (lost when moving house)

If I'm wrong - sorry. But reasonably sure I'm right and only way to prove myself right is to go read each and every one of the edge books again.. if I can.