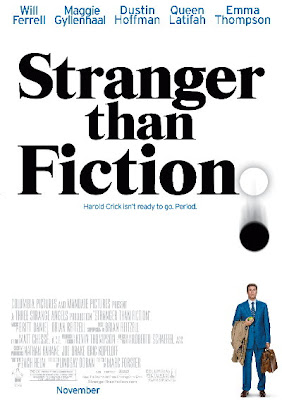 When comedians make serious movies, sometimes it works (most of Bill Murray’s efforts along those lines) and sometimes it doesn’t (most of Jim Carrey’s). In STRANGER THAN FICTION, Will Ferrell tries on a more serious role and succeeds pretty well. He plays IRS agent Harold Krick, whose life is suddenly disrupted by a voice-over narration that only he can hear, coming from some woman with a British accent. Eventually Harold discovers that he’s a character in a novel being written by an author (played by Emma Thompson) who’s struggling with writer’s block. But is he only a character on a page, or does he really exist? That’s the question on which most of the movie turns.

While most of the humor in this film is of the whimsical variety, there are a couple of laugh out loud moments, too, and they’re achieved without Ferrell having to run around naked as he does in most of his other movies. One of the questions plaguing Ferrell’s character is whether the novel about him will turn out to be a tragedy or a comedy, and the same question hangs over this movie until the end. The script is well-written and includes some interesting observations about the nature of fiction; the cast, which includes Dustin Hoffman as an English professor, is good all around; the minimalist sets fit right in with the characters and story; and the music, which is in the same vein most of the time, works well. I enjoyed this one quite a bit, more than I expected to, really. Well worth a look.

Glad to hear you liked this one, as it just arrived in yesterday's mail from Netflix.

My last Netflix movie was Tumbleweeds, from 1925. Looks like I have some catching up to do.

Is that the William S. Hart film about the Oklahoma land rush, Cap'n? And if so, did you see the version with Hart's introduction that was filmed much later, like in 1939? Good stuff.